August 12th was the day of the Manitoba IBA Programs Delta Marsh blitz. Forecasts of 36 degrees, smoke from the forest fires of western Canada and high humidex indices had given us some hard thinking before going ahead. We did, and Tim Poole reports on how the morning progressed.

The confusion started on Thursday morning. An email arrived in my inbox advising that the forecast would cause difficulties for the health and wellbeing of our volunteers. We originally planned to begin at 7am, early(ish) to ensure that we were complete ahead of the midday heat. What I had not envisioned was that the forecast would threaten record temperatures, humidity would soar, and that the dry summer in Manitoba was being experienced elsewhere, notably in western Canada, where winds had been pushing smoke from forest fires into the eastern prairies.

So I postponed – or more accurately, provisionally warned that I was inclined to postpone.

Then, following some further information during the day, I reconsidered. What if we could get things done earlier, and get out sooner? The heat would in fact only be an issue for the small group of volunteers walking on St Ambroise and Twin Lake Beaches. So, we came up with a compromise. We would make sure those walking would be finished by 10:30am, and therefore start at 6:30am. By Friday, we had done our refreshment shopping, and we were all set for a Sunday blitz.

We had set up five groups. Cal and Gord would be taking the area of the IBA west of the diversion. Gene, John and Garry would be active east of the diversion up to the main road into Delta Beach. Lynnea, Chris, Natalie and Dick birded along the northern edge of the IBA between St Ambroise and Delta Beach, and then Jo, Betsy, Bonnie and Emily took on the St Ambroise and St Marks area. Finally, Pat, Dave and Wally were to do the eastern stretch around Lake Francis and up to St Laurent. These were our driving groups. Our walking groups consisted of Christian (to Clandeboye Bay), and Randy, Jock, Amanda and Sabina (St Ambroise and Twin Lake). Me? I took on the role of support driver, water carrier, and walking assistant, making sure everyone was safe in the heat. As mentioned, we split the IBA to 5 main areas, and here is how we did it:

The intention of the blitz was to find groups of waterbirds, such as grebes, pelicans and cormornats and try to seek out any large groups of shorebirds. We had previous in this area (we had 3 reports, day 1, day 2 boating and our final tally), and went in with some hope of repeating the success of our 2016 blitz.

Lake water levels have certainly dropped in the past year.  The sand bars and mudflats  would surely provide habitat for high concentrations of shorebirds, especially those stopping over during their long migration. Many of these shorebirds are extreme long-distant migrants – that is they fly from the Arctic where they breed, all the way to South America. Many of these long-distant migrants are declining significantly, and therefore it is imperative that we are able to produce good quality data to demonstrate the importance of Manitoba wetlands to this group of birds. 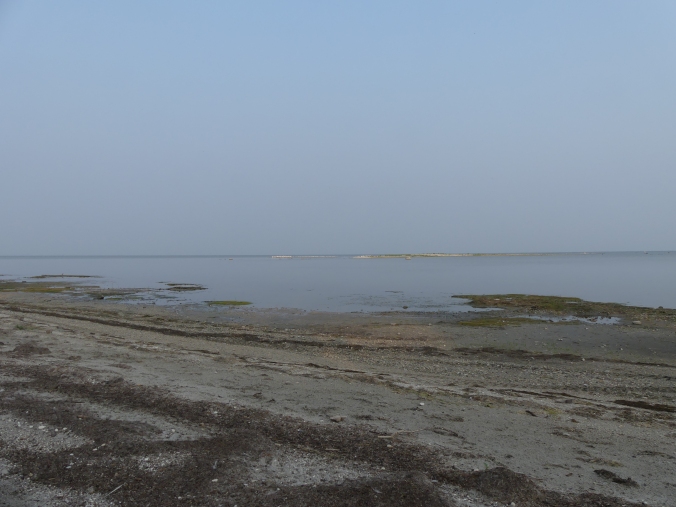 Christian was heading for Clandeboye, an area which has previous for high numbers of shorebirds. Cal and Gord were also heading to the area where over 3,000 Semipalmated Sandpiper were counted during that same 2016 blitz. The habitat at St Ambroise appeared to offer a multitude of foraging opportunities. High hopes indeed!

But where were the shorebirds? Overall we had some fairly good numbers of some species, but the high concentrations we were expecting. Maybe our lower numbers reflect the news coming from the Arctic that many shorebirds have failed to breed in 2018. 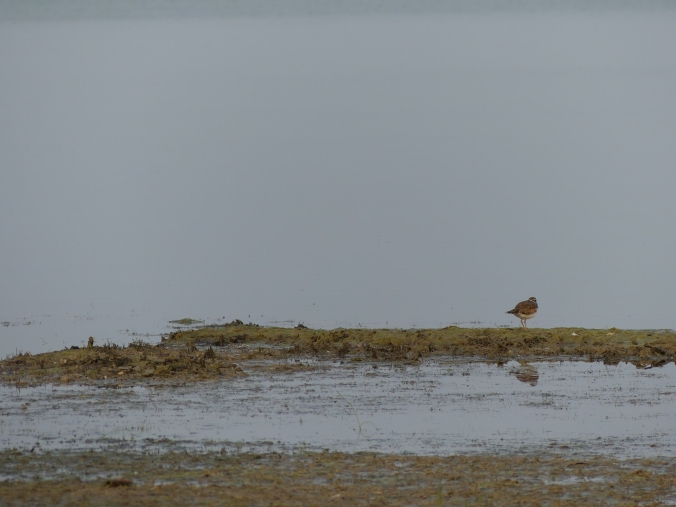 A bit typical, some tasty looking habitat, but only the odd shorebird foraging within it. Copyright Tim Poole

Personally, I could see that shorebirds were few and far between. I found a Black-bellied Plover on a stony outcrop at St Ambroise, but the larger concentrations noted were of Double-crested Cormorant, American White Pelican and various gulls and terns. Twin Lakes Beach had some wonderful mudflats, but also those all too familiar Manitoba ATV tracks along the sand.

ATV’s – possibly scaring any remaining wildlife away – there were a handful of shorebirds in this ‘ideal’ habitat. Copyright Tim Poole

The most obvious birds were the yellowlegs, Spotted Sandpipers and Killdeer. 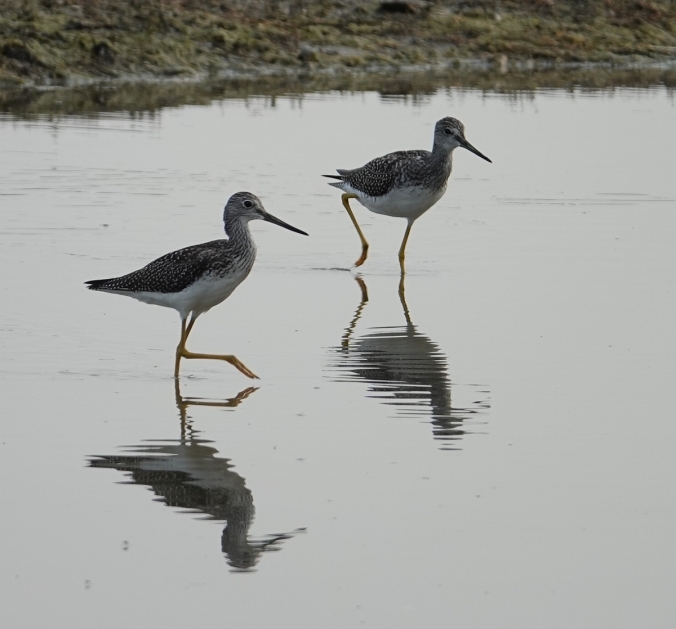 Comical is as comical does. Greater Yellowlegs as with many shorebirds always give the impression of being a wee bit ‘funny’. Copyright Randy Mooi

Randy, being the Curator of Zoology at the Manitoba Museum, always finds something to keep himself entertained, this time the movement of  Canada Toads across the beach. 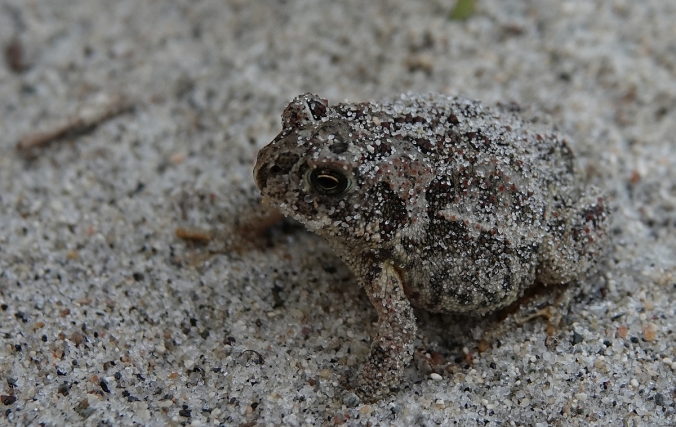 By around 8, having birded west from the end of 430 on St Ambroise, I had met up with Jock, who had been delayed, and Randy who had walked east from the St Ambroise parking lot.

Gadwall’s ahoy! Tim and Jock trying to make them into Mexican Ducks (anyone familiar with the latest eBird update might get this comment). Copyright Randy Mooi

At this point, we headed for the car, and went to meet Sabina and Amanda, who had done the first stretch of Twin Lakes, from the end of PR430 east around the headland. They managed to score five Ruby-throated Hummingbirds, a Black-billed Cuckoo, and a very tidy count of 256 Double-crested Cormorant. In terms of shorebirds, there were only a few Killdeer and yellowlegs noted.

The most interesting feature of the drive were the counts of swallows on the powerlines, primarily Purple Martin and Tree Swallows. Maybe not as many as Whitewater Lake recently, but none the less, still an impressive sight!

A nice mixed flock of swallows on the powerline. Copyright Randy Mooi

Randy, Amanda, Jock, Sabina and I arrived at Twin Lake, passing another group, Wally, Pat and Dave on the way. This group found 5 species of shorebird from Lake Francis to Saint Laurent. A field of Mallards totaled over 300, and they also found 20 Sandhill Cranes, a species which will soon be on the move in higher numbers. A total of 57 species was pretty impressive for the morning, and included some higher numbers of blackbirds and swallows. Lake Francis itself is apparently an area with good numbers of shorebirds and grebes, but very hard to access. We need a boat obviously!

Semipalmated Plover and Least Sandpiper with gulls and Caspian Tern in the background. Copyright Randy Mooi

The walking group arrived at Twin Lake and with time short available, I immediately tried to whip them into shape…well, sort of! As with Saint Ambroise, the shorebird habitat was impressive, and we did at least find a single Semipalmated Plover, a nice small flock of Least Sandpiper, and various waterbirds including some handsome Caspian Terns. 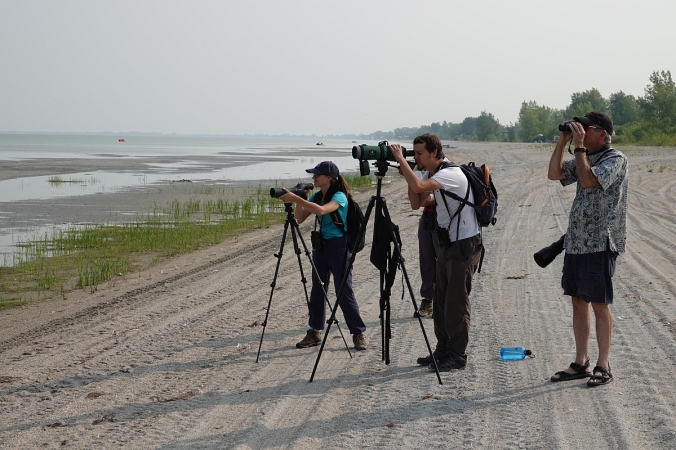 Sabina, Jock and myself searching the beach. Amanda has been reduced to a foot! Copyright Randy Mooi

Bonnie and Emily, and Jo and Betsy separated into two groups to cover their area. Bonnie and Emily recorded 71 species, including some good numbers of ducks, 46 Canvasback being a standout. They also came across some fall warblers, including Northern Waterthrush, Sharp-shinned Hawk and Lark Sparrow. Jo and Betsy found 68 species, including a flock of 29 Great Egret flying over, and also two groups of the nationally threatened Red-headed Woodpecker. Nice! Again, shorebirds were thin on the ground, only 5 species noted. 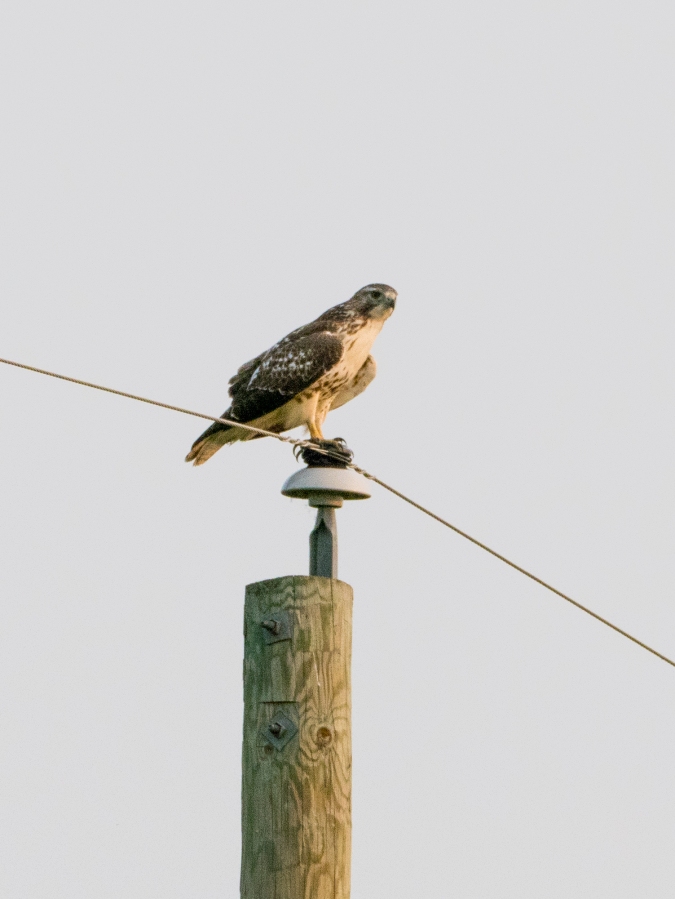 Christian had better luck, recording 89 species on walk from St Ambroise to Clandeboye Bay along the foreshore. He was more successful with migrant songbirds, including 12 species of Wood Warbler. Canada Warbler, Bay-breasted Warbler and Magnolia Warbler were all noted. There were 9 species of shorebird in the bay, including 143 Least Sandpiper, and 8 Semipalmated Plover. Christian being Christian, he also managed to find Least Bittern and a Lesser Black-backed Gull. There were also good numbers of pelican and cormorant.

Lots of pelicans and gulls were gathered on the mudbars. Copyright Randy Mooi

These groups met just after 10:30 for refreshments at St Ambroise. The other groups were based around Delta Beach in the west.

Walking along the beach for birds. Copyright Randy Mooi

At this point, I will break off to thank our intern, Lynnea Parker for coordinating refreshments with these groups. Her group took on an area north and east of Delta Beach. The early morning sunrise certainly gave opportunity for some nice photos! 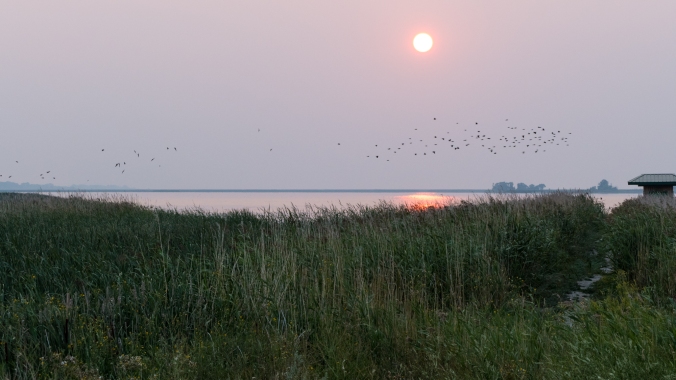 Following our long, dry summer, many of the fields were completely dry, and this was reflected in the IBA totals for the day, with this group only finding two species of shorebird. The birding highlight was a Solitary Sandpiper, and a lifer Le Conte’s Sparrow for Chris. They were joined by Dick and Natalie from Alonsa.

The three amigos, Garry, Gene and John, had a slow start, but ended well. Unfortunately, John was unable to find the Red Knot, Western Sandpiper, and Curlew Sandpiper, species which I had promised beforehand, but they seemed to have a good time regardless. They had some nice shorebirds, including Stilt Sandpiper along the diversion. They also spotted a flock of 30 Bobolink! This group finished at Delta Beach where they were greeted by 30 Sanderling, and over 700 Franklin’s Gull.

Photo of the day from Garry Budyk. He really should take up photography more seriously!

Cal and Gord were most enamored with Prairie Falcon, a regular late summer visitor to Manitoba, but always a great find. Cal was also delighted to get his first of the year Baird’s Sandpiper. They noted 18 species of shorebird, including 38 Pectoral Sandpiper, 144 Least Sandpiper, and a Red-necked Phalarope. Many of these birds were seen on the west side of the diversion, and in wet mud along creek crossings.

Thank you to all who came to help out – I hope you enjoyed a fun morning out. Here are the final scores: