Tim here with an overview of our recent blitz at the world famous Delta Marsh. Firstly, a bit of a disclaimer. Due to severe jetlag, I am unable to remember very much of what happened on the morning at Delta Marsh. Fortunately, thanks to a collection of photos and records from elsewhere, we can fit together a story of endeavor and skill from our fantastic volunteers.

To begin with let us start with some background to the Delta blitz. Boat surveys over the previous couple of years by staff at Manitoba Sustainable Development revealed that there were large concentrations of migrating shorebirds using areas of the marshes interior. Although historically a good place for shorebirds, changes in water levels and the impacts of invasive carp had altered the marsh habitats. The Province of Manitoba have in the last few years worked with partners to exclude the carp from the marsh. As bottom-dwelling fish, carp disturb sediments and uproot plants, leading to deteriorating water quality and loss of aquatic plants and wildlife. Manitoba Sustainable Development have been monitoring the impacts of the carp exclusion on the marsh and the indications are that water quality has improved, emergent vegetation is beginning to establish and wildlife is returning.

See Carp Exclusion Project and the video below for more information on this project.

Cam Meuckon from Manitoba Sustainable Development had originally asked the IBA Program to arrange this blitz in May or June but unfortunately we had to postpone this on three occasions due to poor weather. A late summer/early fall blitz was the only option. Cam had been monitoring the marsh and noticed that there were large concentrations of shorebirds on exposed mud around floating dead cattails. I saw this phenomenon myself when dropping by near Delta Beach one day and spotting several hundred shorebirds in these dead cattails west of the access road. 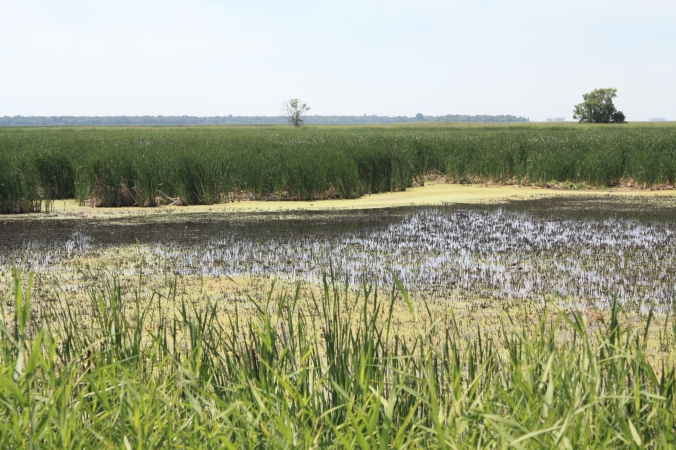 Dead cattail marsh at Delta in late July. If you look very carefully, those small dark blobs are shorebirds. Interestingly, this area of marsh had dried out by late August, something we will return to later on. Photo copyright Tim Poole

Again we were fortunate to have great numbers joining us for the blitz. We eventually ended up with around 8 groups and about 23 people including Manitoba Sustainable Development staff Matt Tower and Riley Bartel who guided a couple of our groups along some privately owned areas.

I kind of slumbered through my group with the ever cheerful Marshall Birch, Pat and Dave Wally and new volunteer Stephanie Connell. We were tasked with monitoring the area around Lake Francis and the east end of Twin Lakes Beach. We had difficulty with accessing Lake Francis itself but still managed to pick up some shorebirds on the beach. Raptors were probably among the most numerous birds in our area.

More interesting was the Harlequin Duck found by Matt Gasner on the point where Twin Lake and Ambroise Beaches meet. Matt also had some great luck on the shorebird species count with 13 species. 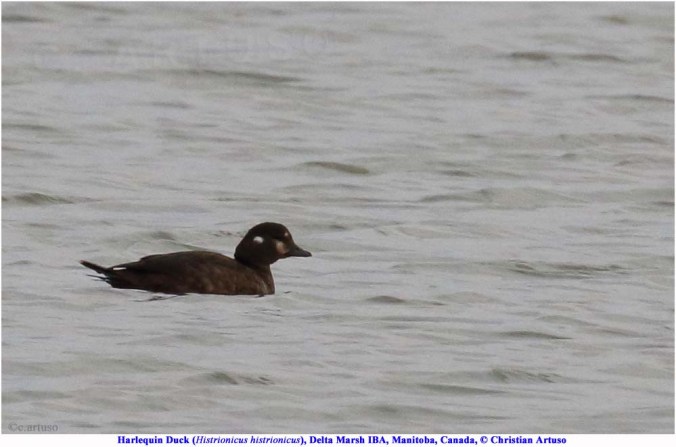 A northern rarity at this time of year, a Harlequin Duck, bird of the day! Photo copyright Christian Artuso

Closeby, Christian Artuso walked along a private track (with kind permission) to access some bays on the marsh interior. What is it with this guy? A shorebird magnet! In addition to 11 species of migratory wood warbler, Christian found some of the best shorebird numbers on the blitz (but possibly not the best, more to come on that). The following photo captions summarise some of these numbers: 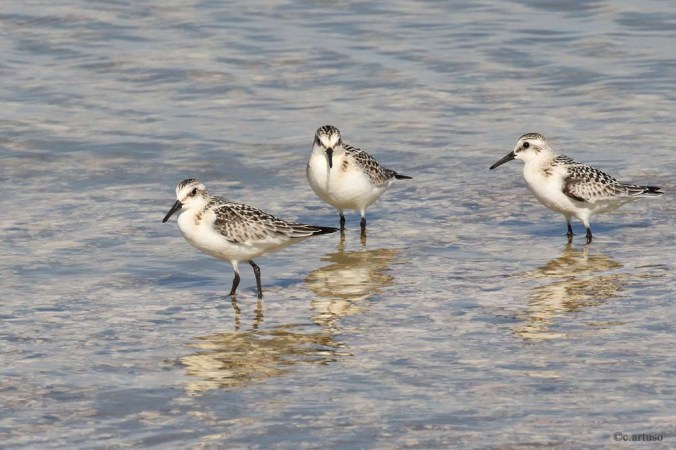 Two groups, Carrie Braden and Luc Blanchette and Bonnie Chartier, Katharine Schulz and Emily McIntosh monitored along Delta Beach and an area north of the marsh interiro with kind permission from Delta Waterfowl. One group had a large flock of Black-bellied Plover and there were very good numbers of herons.

Great Blue Heron, one of the species present on the marshes interior. Photo copyright Josie Brendle

Cal Cuthbert, Janice Madill and Gord Ogilvie, the Portage team walked along the diversion and on Delta Beach. Bird numbers were low on the diversion but better on the beach. Highlight? A Prairie Falcon! They counted over 1000 Franklin’s Gulls and 320 Semipalmated Sandpipers.

Our final group hit the jackpot. Colin Blyth, Louanne Reid and Erica Alex were able to count around 4000 shorebirds at a single point on an opening in a creek.

Semipalmated Plover among a plethora of shorebirds. Copyright Erica Alex

This group had an unusual personal highlight. A Red Knot is not an unusual shorebird at this time of year in Delta but usually one would expect to see it on the beach rather than an internal waterway. The group found this first winter Red Knot among the other shorebirds. 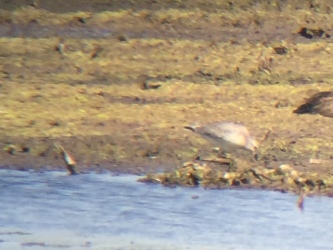 A second blog will follow later this week with a second day of monitoring and then the final blog with the IBA totals. Watch this space. But to finish, Jo, Matt, Betsy and Christian really lucked out on the way home near Marquette seeing 34 Buff-breasted Sandpipers outside the IBA (boo). See Christian’s personal website for the story.