Back to Delta on Monday morning and this time I’m if anything a little more dreary thanks to the 3am wake-up from my daughter. But the show goes on. A quick detour en-route to Marquette and the Buff-breasted Sandpipers appeared to have gone.

Arriving at the Delta Waterfowl Centre near Delta Beach, we got to watch a number of warblers on the ridge as we waited for people to arrive. Black-throated Green, Cape May, Magnolia, Orange-crowned, Tennessee, Blackpoll, Myrtle (I’m convinced) and American Redstart were all present. In addition to the road and foot patrols of Sunday, we had agreed to get two teams to survey the marsh interior on boats provided by Manitoba Sustainable Development. In addition to our excellent guides and boaters Matt Tower and Riley Bartel, we had Christian Artuso, Cal Cuthbert, Bonnie Chartier and Joanne Smith ready and willing to get their feet wet in the interest of bird conservation.

The interior of Delta Marsh, at least on the east of the access road to Delta Beach, consists of a series of channels and areas of open water interspersed with small islands and areas of cattail marsh. To survey this entire area in just 4 hours would not be possible, and with a focus on shorebirds and the wind coming from a north-westerly direction, it was only ever going to make sense monitoring the marsh along the northern bays. As mentioned in the previous blog, the focus of this shorebird monitoring were areas where the water levels had dropped sufficiently to expose cattails and the surrounding mud. This created a unique habitat of dead cattails and wet mud, ideal for foraging shorebirds. Again, as mentioned on the previous blog, the water levels dropped during August which may have reduced the area of available foraging habitat. This pattern was noticeable in some of the sheltered bays we accessed by boat and our guides confirmed that they had previously seen higher densities of shorebirds earlier in August.

We split into two boats, Riley taking Christian and Joanne and Matt taking Bonnie, Cal and myself. The first boat (group 1 on the below map) surveyed the northern edges of Simpson, Blackfox and Bay 22 and the second (group 2) focused on Clair, Gadwell, Waterhen and the surrounding areas.

Surveying by boat possesses a number of unique challenges compared to land-based surveys, not least the challenge of watching birds through binoculars on moving water. Fortunately being on the sheltered side of the wetland, this was not a big issue. Another challenge is that a moving boat tends to flush and move birds which are either on the water or feeding close to the shore. This raised issues of double-counting. Interestingly, the shorebirds appeared to be the least jumpy birds on the day which was obviously good for us but pelicans on the otherhand do not appear to appreciate fast moving boats….

As with our previous blitz at Whitewater Lake, I came to the conclusion that we must have missed a peak of migrating shorebirds on this survey. The reports given by both Matt and Riley were of larger concentrations in the preceding weeks. This is one of the dangers of any monitoring program for migratory birds but alas there is little we can do apart from get ore boots on the ground across the season and hope to pick up the peaks and troughs of migratory bird movements. Overnight, the wind had turned from a southerly to a brisk northerly, the perfect conditions for shorebirds on the move. More on that later! The other identifiable difference was that much of the dead cattail habitat had dried out which probably reduced the availability of foraging habitat for shorebirds.

Tipsy photo, we’ll blame the boat! But look carefully and it’s possible to see lots of exposed dry mud. Shorebirds could often be found at the edges where the mud was still damp. Copyright Tim Poole

While making our ways around the various headlands and through the channels, it became obvious that there were a large number of herons using the marsh interior, no surprises there. Our boat on the eastern side of the marsh recorded good numbers of Black-crowned Night Herons, 60 in total. There were also 97 Great Blue Herons. American Bittern and Great Egret were also present, plus over 2000 American Coot.

Taken the day before and used in the previous blog, but was this one of the 97 Great Blue Herons observed on the boats? Copyright Josie Brendle

Caspian Terns were one of 6 species of gull and tern present as Cal Cuthbert shows us below…..

Shorebirds were our primary target and between both groups we counted 17 species. Numbers, something I previously alluded to, were, anecdotally, fewer than previously seen in these areas. The most numerous was Least Sandpiper with 255 individuals. There were also reasonable numbers of Semipalmated Sandpiper, Semipalmated Plover, Killdeer, Greater Yellowlegs, Spotted Sandpiper and Lesser Yellowlegs. My personal highlight was my first Ruddy Turnstone for Manitoba which we only discovered thanks to the driver running us aground on a mudflat.

Returning to the boat launch, we had Mr Cal Cuthbert offering a new exercise regime of boat yoga

Following our arrival on dry land, Cal offered to take us to the spot in the west of the IBA where Colin Blyth et al had observed large concentrations of shorebirds. The previous day there was an image like this:

By Monday afternoon, this was a picture of the same area: 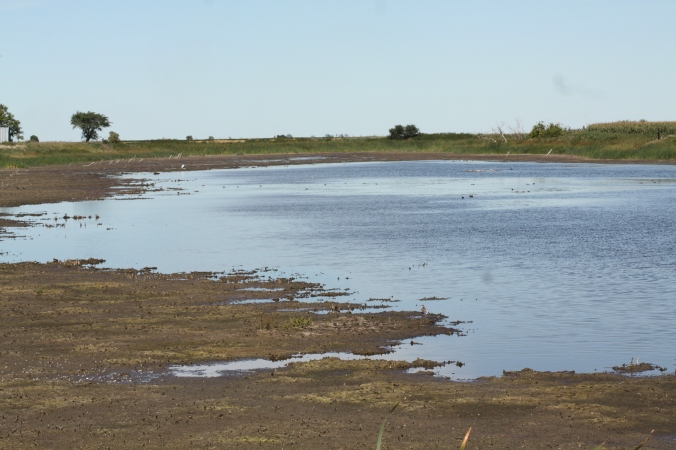 A quick perusal of the data, showed that Colin’s group counted 4,237 shorebirds across their area but almost all being in this single area. That was on Sunday. On Monday we counted in the same area 16 shorebirds, a dramatic drop which indicated a large movement of migrating shorebirds during the previous night. 20 species on Sunday, 5 on Monday. Here’s a quick comparison of numbers:

Interestingly one of the few remaining shorebirds was the juvenile Red Knot.

Red Knot hanging around Delta on Monday afternoon, apparently abandoned by everyone else. Copyright Christian Artuso

The final totals for both days will be posted later. Watch this space