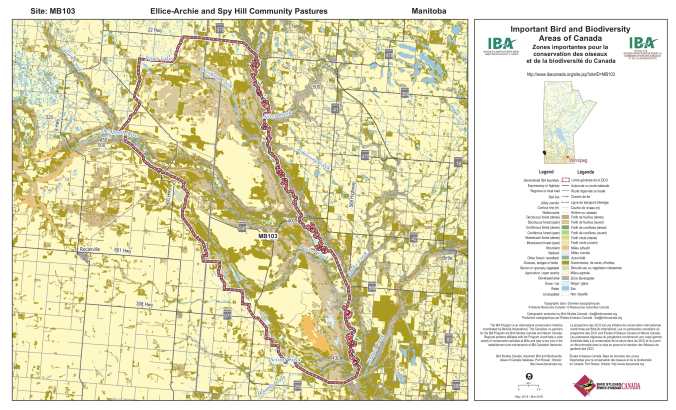 Original map can be downloaded from the IBA Canada website (https://www.ibacanada.com/site.jsp?siteID=MB103)

The Ellice-Archie and Spy Hill Community Pastures take you back to a time long gone. A time when an ocean of grass would spread over the prairies. The experience of wildness begins in the base of the Assiniboine and Qu’Appelle River Valleys. The tall riparian woodlands provide a home for a chorus of migrating and breeding songbirds during May and June.  Climbing the valley sides, the riparian forest phases into an intermediate oak-aspen scrub. Both Eastern and Spotted Towhees breed here – and probably the occasional hybrid can be seen as well. It is only once you climb through the scrub zone that you reach the climax, a sea of grass on the plateau at the top of the valleys. 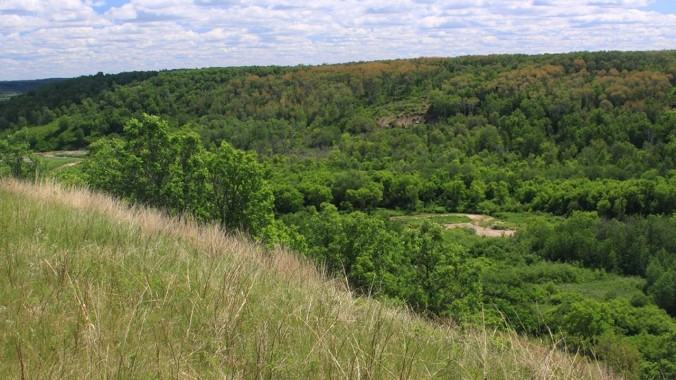 Looking back into the valley, an image of Manitoba’s prairie past. Photo copyright Christian Artuso

The Ellice-Archie and Spy Hill Community Pastures are shaped by history. That history is shaped by the combination of nature and people. The grassland ecosystem would once have been conserved by natural processes, including climate, wildfire and grazing by large herbivores, notably Plains Bison. Some of this area was broken prior to the 1930’s. The dirty thirties define this area in modern history. The Community Pastures were established in the 1930’s as PFRA sites (Prairie Farm Rehabilitation Administration), following years of drought. Drought caused widespread crop failure on lands poorly suited for cultivation, and this led to alternative land-uses being sought. Grass species, notably native species, are drought tolerant and provide land cover which reduces erosion, leading to the establishment of these pastures across Manitoba and Saskatchewan 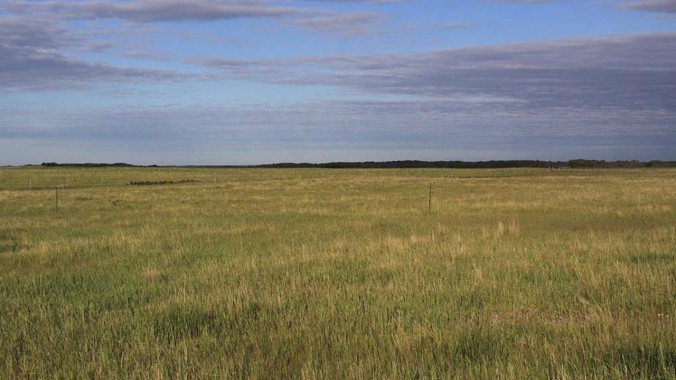 It is rare to find an area in Manitoba with grass this widespread. Copyright Christian Artuso

The two pastures are managed by professional Pasture Managers employed by AMCP. AMCP is a non-profit organization governed by a Board of Directors composed of pasture patrons.  Overall it manages 20 community pastures across Manitoba, and is a significant contributor to the conservation of grassland Species At Risk in Manitoba.

The Province of Manitoba awarded AMCP the 2017 Manitoba Excellence in Sustainability Award for Water and Natural Areas Stewardship.   The Award recognizes AMCP’s range management practices, the numerous environmental benefits of the community pasture program, as well as support for Manitoba’s cattle industry and rural communities.  The specific management activities that support healthy grasslands undertaken by dedicated staff include:

Members of the RIMG are involved in monitoring the wider environment around these Community Pastures. It was during these monitoring sessions that it became apparent that Ellice-Archie and Spy Hill-Ellice were special. Dr. Christian Artuso of Bird Studies Canada carried out point counts in 2017, finding 151 species of birds, including 15 Species At Risk. Of those Species of Risk, some were migrants (Canada Warbler, Olive-sided Flycatcher, Rusty Blackbird, Harris Sparrow), some were woodland, scrub and riparian breeding species (Bank Swallow, Eastern Wood-Pewee, Eastern Whip-Poor-Will), and some were grassland birds.

According to various reports, grassland birds are one of the most under threat groups of birds in North America (see State of Canada’s Birds, 2012 for example). Significant populations of two globally vulnerable species of bird breed in these pastures. Sprague’s Pipit numbers are truly impressive. 146 calling males were counted in 2017 across a sample portion of both community pastures.

It may not look like much, but boy you should hear these guys sing! Sprague’s Pipit provide a cascading flight song, echoing across the prairie. Copyright Christian Artuso

The highest total count of another globally threatened grassland bird, the Chestnut-collared Longspur, was 230 individuals in June 2015. Both these totals qualify as globally significant under Birdlife International’s criteria for IBA designation. At the Ellice-Archie Community Pasture, a total of 1.1 Sprague’s Pipit per point count and 1.4 Chestnut-collared Longspur per point count is the highest recorded densities of these species in Manitoba. 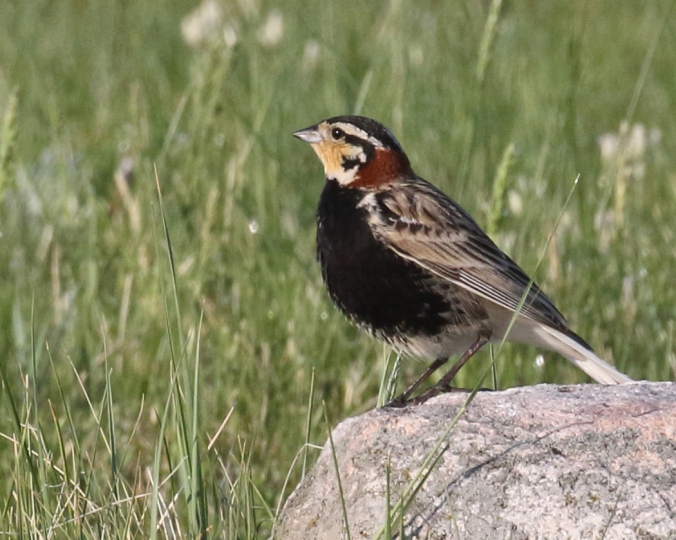 Another threatened grassland bird, Baird’s Sparrow (provincially Endangered, nationally Special Concern) is also present in high concentrations. 12 calling males were recorded here in 2017. There are also good numbers of Grasshopper Sparrow, plus this is one of the best places in Manitoba to see the stunning Mountain Bluebird.

These grassland birds are under severe pressure. They breed in large, uninterrupted areas of grassland. If the grassland is fragmented (i.e., split up into small portions by roads, fences, infrastructure, scrub, or cropland), then the ability of that grassland to support large concentrations of grassland birds becomes compromised. Fragmenting these habitats may also increase levels of predation, and parasitism by cowbirds. Therefore conserving these large areas of grassland are critical to the survival of these species in Manitoba.

It is not just a place which is special for birds. A report from Manitoba Sustainable Development found at least ten provincially rare or uncommon plants within the IBA in 2002, including Indian Rice Grass and Waxleaf Beardtongue. Of most interest was the presence of the Roundleaf Monkey-Flower, a nationally rare species found in springs and seepy slopes.

Ellice-Archie and Spy Hill Community Pastures sits at a crossroads. There are numerous, dire threats facing these critical grassland complexes, including the following:

We mentioned earlier that these are actively managed pastures, but we have not expanded on what this means for the Ellice-Archie and Spy Hill Community Pastures IBA. We have previously espoused the benefit of active grazing management on the conservation of grassland birds. We work on projects with a wide variety of partners, including the Manitoba Beef Producers, Manitoba Habitat Heritage Corporation, West Souris River Conservation District, and Turtle Mountain Conservation District. These projects are aimed squarely at retaining a working landscape, with working people, and grazing animals. Grassland birds need grass. They do not breed in fields of soy beans, or corn, or wheat or potatoes. They need the complex structural mosaic that diverse grass species can offer. They also need the complex structure provided by grazing animals. In our modern world, this means cows. Grassland birds in the native prairies therefore need a thriving beef industry to retain and conserve these special habitats. 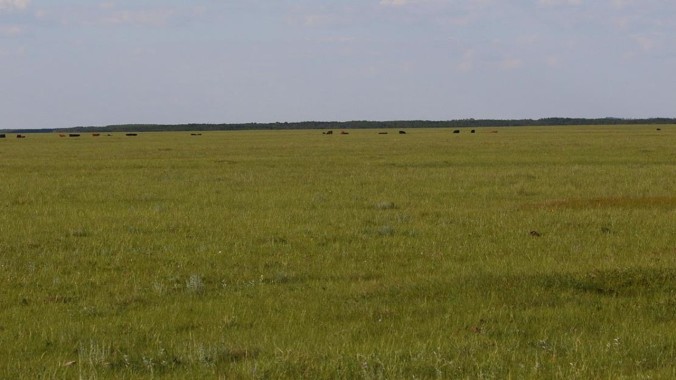 Ecosystem drivers in action in the new IBA. Cattle are of biological, economical and cultural importance to this area. Photo copyright Christian Artuso

A number of organisations, including Manitoba Sustainable Development, Manitoba Agriculture, Nature Conservancy Canada, Manitoba Habitat Heritage Corporation and Bird Studies Canada, are coming together to work with AMCP to find ways to protect this special place. An amendment under the Crown Lands Act was made recently to enable the designation of community pastures as protected areas. The next steps of course will be to bring this to fruition, but this is a postive development which will protect the land, while retaining the grazing interest.

The AMCP and Pasture Managers are the critical component to Species At Risk management at the Ellice-Archie and Spy Hill-Ellice Community Pastures IBA. The grazing animals and the systems they use to sensitively manage this land, has created something special. We have a place in Manitoba where a sea of grass provides habitat for hundreds of threatened breeding birds, in densities found nowhere else in our province. Surely for this reason alone, this is a place not only worth being called an Important Bird and Biodiversity Area, but also a place worth protecting for generations to come.

If you are interested in visiting this IBA, first understand it is a working landscape. You will need permission from the pasture manager ahead of time, and he will obviously not wish to have lots of people calling. If there is interest, instead, first email the Manitoba IBA Program at iba@naturemanitoba.ca, and we will look into if and how that interest can be met. PR41 from St Lazare to McAuley and further south to Kirkella on the TransCanada does cross the middle of Ellice-Archie, so if you are in the area, this is a great way of seeing the IBA without leaving the road.