Outside of the main Manitoba IBA volunteer programs, we have also been involved in a project with a number of partners to conserve grassland Species at Risk in southwestern Manitoba. We will publish a report on our monitoring efforts later this year, but we thought people may be interested in a short update from Lynnea Parker on what was done.

In June, I  helped Dr. Christian Artuso of Birds Studies Canada (BSC) conduct a series of bird surveys from Lyleton, north to Kirkella. These surveys were conducted as part of the Manitoba Species at Risk Partnerships on Agricultural Lands (SARPAL) program, ‘Keep Grazing‘. The primary goal of ‘Keep Grazing’ is to offer landowners, primarily beef producers, incentives to adapt grazing regimes and incorporate beneficial management actions in the most important corridor for mixed-grass prairie Species at Risk remaining in Manitoba. BSC and the Manitoba IBA Program are providing bird surveys to support the incentives program. These surveys provide a baseline of what birds are present, and will, we hope, provide opportunities to further engage local landowners in grassland bird conservation schemes. 2018 marked the third year of the program, and the second year of field work, and bird surveys have been completed for 50 landowners encompassing 60 properties. 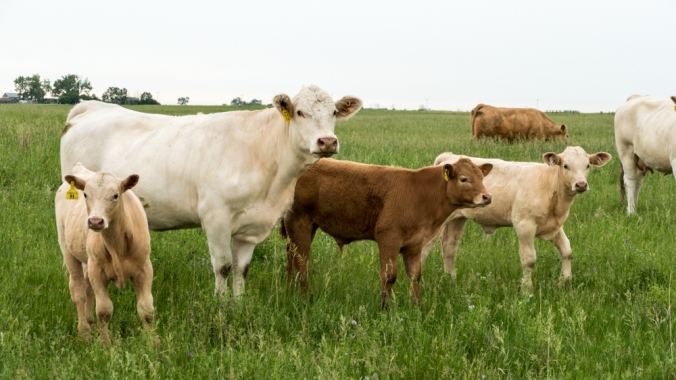 A herd of cattle graze a pasture of mixed-grass prairie in southwestern Manitoba, photo by Lynnea Parker

I have always held a deep appreciation for field work as it connects me to the land and nature in ways that sightseeing from the road cannot. As I hiked across mixed-grass prairie this summer, I was reacquainted with how unique and diverse every remaining parcel of this threatened ecosystem is. While each section of grassland may appear homogeneous (the same) from the road, walking across the land enables one to see the differences in grass composition, plant and insect diversity, animals, and ground structure. No single parcel of land is the same as another, and this difference (heterogeneity) is a part of what makes grasslands and cattle grazing so important.

For specialist bird species, such as Baird’s Sparrow, Sprague’s Pipit, and Chestnut-collared Longspur, heterogeneity is very important. Each of these grassland birds prefers habitat characteristics which are slightly different. These differences are usually noted in grass density and cover, among other factors such as the presence or absence of sage brush and wolf willow, and proximity to edges, such as roads and tree lines. It is these “special” habitat requirements paired with extensive habitat loss and degradation which has led to the declines of many grassland bird species.

A male Chestnut-collard Longspur in grazed mixed-grass prairie. Carefully look at the interaction between tufts of grass, bare ground, and species diversity. This demonstrates the heterogeneous habitats referred to in the remainder of the blog. Photo by Lynnea Parker

In contrast, generalist species, such as the Savannah Sparrow, Western Meadowlark, and Eastern Kingbird tend to be considered widespread and abundant. These species do not require specialized habitat features to remain successfully competitive in their environment. So why is heterogeneity actually important? it is important so that each species can find areas within a landscape which meet their own foraging and reproductive requirements. Cattle or bison create and maintain heterogeneity, both within a single grazing unit, and across the wider landscape. Simply put, different grazing strategies result in heterogeneous grass structures.

A Western Meadowlark perched on a fence, photo by Lynnea Parker

Getting back to my summer experience, Christian and I would wake up before sunrise so that we could survey from 5:00 am to 10:00 am every morning. Depending on the size of a given property, we would attempt to conduct between 9 and 21 point counts, a minimum distance of 350 meters apart. These point counts provided a snapshot of the bird diversity at each site. Once and a while a herd of cattle, or in one instance horses, would get overly curious and run over to investigate my presence. After a morning of surveys, we would typically return to the field house in Pierson to backup our data and take a nap. Christian was fond of taking a drive in the evening to bird in Saskatchewan for the Saskatchewan Breeding Bird Atlas and sneak in some owling. On occasion we would also take detours on our way back to the field house to see a new area or find a particular species, such as the rare Lazuli Bunting! (featured below)

A male Lazuli Bunting has been spending the last few summers in a known location along the Antler River, southeast of Lyleton. While I had seen this rarity last summer with Christian, we both had wondered if it would return again this year. After arriving at the spot we had detected it previously, we found a bird… just not the one we were expecting to see! Darting between the branches, pausing briefly to sing, we saw a vibrant blue bird with white underparts and white wing bar. Now this was odd, as we both knew male Lazuli Buntings had an orange breast for starters. It was Christian who identified it as a probable hybrid, which was later confirmed! This individual was a Lazuli x Indigo bunting. Just to make matters more interesting, Indigo Buntings do not generally occur near Lyleton either.

After spending some time at the site to obtain photographic documentation, the true male Lazuli Bunting made an appearance. With both birds on site, it was a special opportunity to see them in close comparison.

I thoroughly enjoyed spending time this summer near Pierson, Melita, and Lyleton. I would highly encourage anyone with a love of nature to take a trip to the southwest corner to see for yourself what these grasslands have to offer.