Note: Cursed once again by the ol’ oops-we-had-the-camera-stuck-on-“video” problem, but this time we got a few of our own photos, so we’re only partially relying on Christian Artuso’s.

On May 18th, Tim and myself headed West towards Proven Lake IBA, where we would meet with a local landowner who was to help us explore the area. Whilst attempting to decide upon the most efficient route, we realized we were not far from Big Grass Marsh, a Game Bird Refuge that also happens to have been designated an Important Bird Area under the title Langruth – RM of Lakeview. 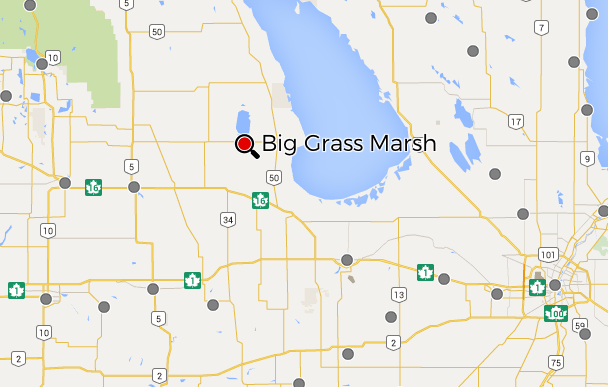 Big Grass Marsh location, with RMNP at top-left and Winnipeg at bottom-right.

Due to time constants, we were unable to do any hunting for special access points or any of that business, but lucky for us there happens to be a gravel road (Highway 265) that runs between the towns of Langruth and Plumas, and right through the marsh. This road provides easily accessible and rewarding birding right from the roadside, even just for a drive-through.

Red-tailed Hawk in Langruth, not far from the IBA. © Tim Poole

The side-trip began with a fine sign of things to come – a large Red-tailed Hawk sitting on a pole overlooking a field of Robins off the side of the road in Langruth. We followed Highway 265 towards Plumas until we were fairly certain we had entered the IBA and began counting. As expected, waterfowl were the main attraction here – Canada Geese, Blue-winged Teals, Northern Shovelers, Redheads, Gadwalls, Coots, and over 100 Mallards, to name a few. 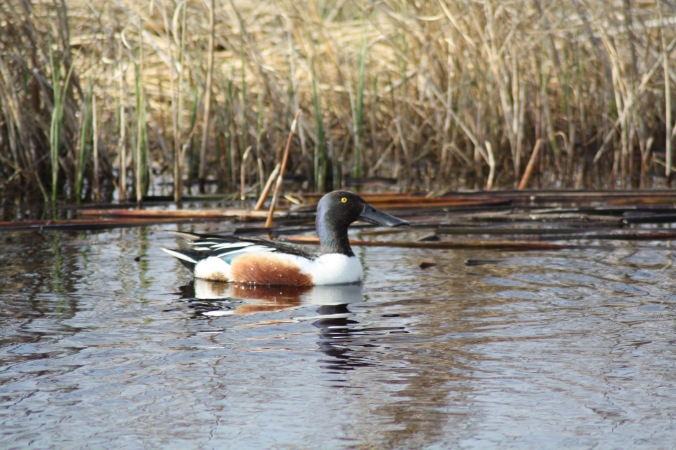 Other species of note included Sora, Red-necked and Pie-billed Grebes, an assortment of Sparrows, Marsh Wren, Baltimore Oriole, Killdeer, Virginia Rail, Wilson’s Snipe, Ring-billed Gull, American Goldfinch, and Yellow-headed, Brewer’s, and Red-winged Blackbirds (140 of the latter). Along the way there was also an old bridge swarmed by over 200 Cliff Swallows, along with a decent number of Bank Swallows.

A look out at part of the marsh. © Tim Poole

Big Grassy Marsh itself consists of various habitats – marsh, tall-grass prairie, woodlands, lakes, and scrub, surrounded by Southern Manitoba’s ubiquitous agricultural land. Even on a short drive through, the heterogeneity of the site was clear, giving a quick sampling of many of the province’s most valuable birding habitats. Manmade drainage ditches and dykes are evident, remnants of work thats been going on in the area over the past century – from draining for agricultural use in the early 1900’s, to restoration projects beginning in the late 1930’s (Ducks Unlimited’s first restoration project in Canada, as a matter of fact). 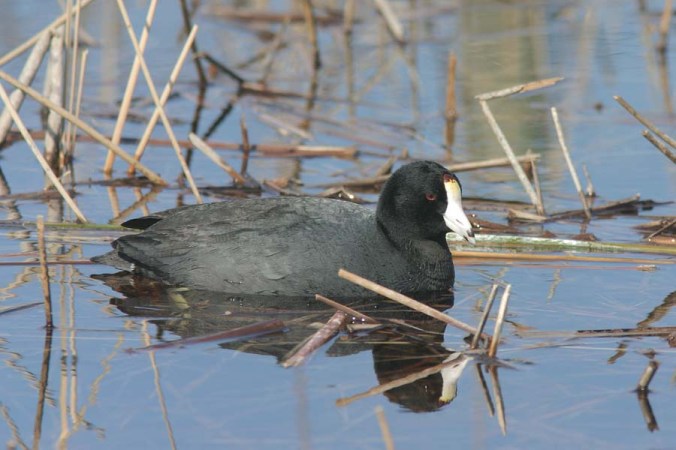 Though it has in the past been called one of North America’s most important waterfowl staging areas, public awareness and attention to the site has waned in recent years. Little data exists regarding species populations over the past twenty years, though there is evidence that populations of some species, such as the Sandhill Crane and the Franklin’s Gull, have drastically fallen. It is likely that agricultural practices have had the largest impact on the area.

There is a bright future for the marsh, however. People are once again focusing on the natural importance of the area. New conservation agreements, signed in 2014, will give the marsh increased protection, and plans are being worked out to promote the area as an ecotourism destination, including hiking trails around Jackfish Lake, the largest of the area’s three lakes. For the average birder, the site provides an array of different habitats, all boasting high numbers of various species, and suitable for various abilities, from those who want a gentle drive through the country to those who want a more adventurous journey deeper into the marsh.