Joanne Smith, Caretaker for Riverton Sandy Bar IBA made the Program aware recently that Zebra Mussels have been found on Lake Winnipeg near Riverton Sandy Bar. Joanne subsequently found Zebra Mussel shells within the boundary of the IBA. Manitoba Conservation and Water Stewardship are taking a lead on attempting to stall the progress of this aggressive invasive species which has now been found almost as far north as The Pas, in Cedar Lake.

The presence of Zebra Mussels will have an impact on all users of Manitoba’s wetlands and lakes and has led to Conservation and Water Stewardship Minister Tom Nevakshonoff releasing a statement last week revealing that new legislation has been scripted to prevent their continued spread across our province. The law now states that all watercraft users will now need to ‘Clean, Drain, Dry and Dispose’. There are more details in the release and on the website.

This will have implications for our IBA volunteers and I will need to follow this up in the winter and spring but for the moment, the people at Manitoba Conservation and Water Stewardship have helpfully produced this informative factsheet: zebra_mussel_fact_sheet. All our volunteers using watercraft will have to follow these new laws, so this is a heads-up!

Finally, here are the photos and text from Joanne’s IBA Riverton Sandy Bar MB091 Facebook page to give you a flavour of what to look out for:

ZEBRA MUSSELS. Yes, these shells were found today at IBA MB091 Riverton Sandy Bar this afternoon. It wasn’t really a surprise as they have been found in the Riverton, Hecla and Matheson Island areas in the last few months. A more recent MB finding was at the more northerly location of Cedar Lake, west of Grand Rapids.

One shell was found last week at Sandy Bar washed up in the area of the rocks seen below. The two shells seen today (in the photos below) were also in this same general area, within 30 meters of the parking area. 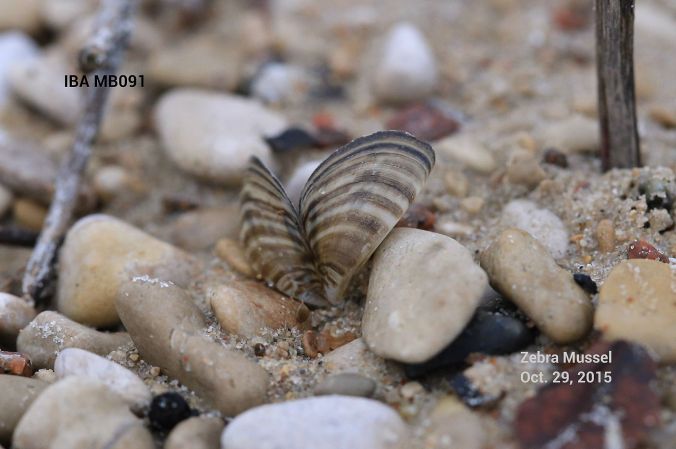