Callie Bowman has been working as a data reviewer for Christian Artuso since the beginning of July 2015 thanks to a Science Horizons grant (a federal youth employment grant that gives recent grads work experience in their field of interest). During the summer, she assisted with field work looking at avian malaria in Golden-winged Warblers for Chelsea Enslow, a Masters student from the University of Manitoba. Since then, she has assisted Christian, gaining experience in grant writing, database management, bird surveys and preparing various publications. Here Callie blogs about a meeting she attended earlier this week organised by Nature Conservancy of Canada on the future of Manitoba’s Mixed Grass Prairies.

On Wednesday, October 28, 2015, at the crack of dawn (well actually before dawn), Christian Artuso and I, along with some other folks from the Wildlife Branch of Manitoba Conservation headed off for Melita for the day.  The Nature Conservancy of Canada had organized a Conservation Workshop, aimed at bringing together knowledge and expertise from various groups, organizations and locals who live and work in the Mixed-grass Prairie of the West Souris region.  Luckily the long drive was broken up by a quick stop in Brandon to have breakfast but after that, it was straight on to Melita.

There were roughly 30 people in attendance, representing a wide range of groups including various governmental organizations, NGOs, local Conservation Districts and landowners.  The mix allowed for great conversations, bringing to light new perspectives from lots of different interested parties.

The morning started with some presentations about NCC and specifically what they are doing in the West Souris region, followed by a presentation by Christian about the state of prairie birds in the area.  Unfortunately (as we probably all know), the presentations on the sad state of the mixed-grass prairie and grassland birds in the area left everyone ready to swing in to planning action to come up with ideas of how combat these declines! 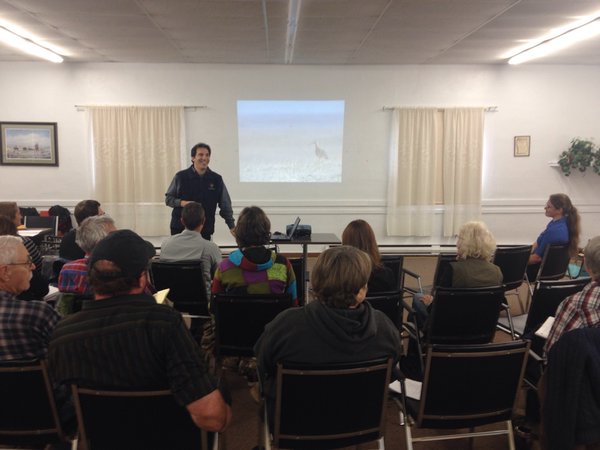 The afternoon involved a lot of discussion-based activities in small groups.  In my group, we had representation from NCC, Environment Canada, Manitoba Conservation, local Conservation Districts, a local farmer and the local PFRA. We discussed topics such as the pros and cons to economic and energy development in the area, barriers to conservation and strategies moving forward.  The afternoon was concluded with a large group discussion, summarizing what each group had come up with.

As someone who was totally unfamiliar with this ecosystem before arriving at the workshop, I gained a lot of valuable information about the issues that face the Mixed-grass Prairie and possible ways to conserve what we have left for the future.  It was especially valuable having so many parties represented because it allowed for everyone to share knowledge and perspectives from groups who don’t always have the change to sit down and talk to one another. By the end of the day, it seemed everyone was a little more optimistic about what can be done to protect the habitat and species that live there.  One of the continued solutions that kept coming up throughout the afternoon was education (unsurprisingly); all types of education, ranging from programs at local schools, to training farmers on best practices to aid conservation, to signs along roads to educate visitors on important species or habitats in the area.  Lots of positive strategies and lots of excitement!

Then it was home to Winnipeg. Despite it being a long, 14+ hour day, I am very grateful for the opportunity to attend and participate in such an informative and positive day!

Long gone on migration now, the Sprague’s Pipit is one of the most threatened birds of the Mixed-grass Prairie. Hopefully the outcomes from discussions on Wednesday will lead to a more positive future for birds such as this. Photo copyright Christian Artuso (http://artusophotos.com/)