We recently spent the morning with volunteers searching for Red-Headed Woodpeckers in the North, East and West Shoal Lakes IBA. Kelsey Bell, our Summer Assistant, recaps the day.

Rain, rain and more rain! That was how the day started out the morning of July 14th, 2019, when volunteers from Winnipeg, Gimli and beyond were getting ready to head to North, West and East Shoal Lakes IBA (Woodlands, MB) in search of Red-Headed Woodpeckers. Despite the turbulent start to the morning, 15 dedicated volunteers still made the trek to their sites in the hopes of detecting these iconic species.

As the thunderstorm and rain subsided for the day, we were treated to a flurry of bird activity. It was hard to drive more than 200m without having to stop to record a whole new list of species. My group took care of the areas to the South and Southwest end of the lakes for the morning survey. Following lunch, we slowly birded our way back to Winnipeg along the East side of the lakes. The diversity in the area was incredible! By the end of the day, we had a total of 80 species. Great Egrets were present in high numbers, there seemed to be a group of them around every corner. A Black-Crowned Night Heron and two American Bitterns were seen flying over, as well as numerous American White Pelican’s. Closer to the shores of the lake we detected Sedge Wrens, Le Conte’s Sparrow, Nelson’s Sparrow and of course a ton of Red-Winged Blackbirds. It was a pleasant sight when we spotted large numbers of Western Grebe’s through the scope, many with babies on their backs.

One of the many groups of Great Egrets seen at North, East and West Shoal Lakes IBA, copyright Kelsey Bell. 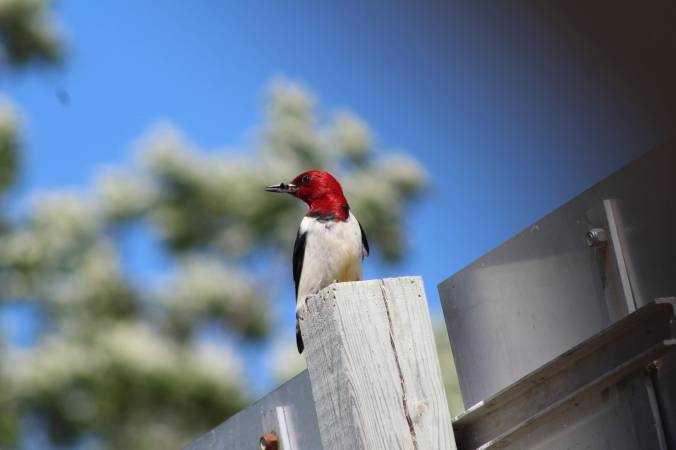 Despite the delayed start due to poor weather conditions, it was a very successful day! Thank you to everyone who got up at the crack of dawn to brave the weather and make the trip! Each observation is helping contribute to the identification of critical habitat for Red-Headed Woodpeckers in Manitoba.