Tim Poole has finally thawed out from a bitter weed pull on Friday September 28th. Here is a report on another successful morning at the ‘Bar’.

8 degrees, that’s what they promised. 8 degrees and sunshine, almost the ideal conditions for a Friday morning weed pull at the end of September in Manitoba. This was Wednesday, and we were getting ready for another morning recreating habitat for Piping Plovers. It was therefore, to my absolute horror, when someone at home (she who shall remain nameless), announced that the forecast on Thursday had swung around, and was now a rather milder 1 degree, and flurries. A tiny bit of a turnaround then!

We decided to plough ahead, warning everyone who had contacted us beforehand that the weather was possibly going to be fowl (ok, allow me at least one more bird pun), but we would be going ahead regardless. We are after all a hardy bunch.

The drive up to Sandy Bar was punctuated by many a bird sighting. Seven eBird checklists worth apparently (a recent convert to the eBird App was responsible for recording bird sightings). Sharp-tailed Grouse were probably the best species, although, as the driver, I missed out on that particular species. Not to worry, Sandy Bar rarely disappoints at this time of year.

Arriving early, and the first few souls were already looking chilled to the bone. The north wind rushed across Lake Winnipeg, and what’s more, the coffee and muffins had not materialised. In life, there are times when you need a nice hot coffee, and this was one of them. Eventually, Lynnea and Ward arrived in a flurry of glory, and produced the aforementioned beverages and snacks, and we tucked in (it turned out that ordering in advance, does not mean that your order will be ready – or even being processed when you arrive). At least the early arrivals got to start birding – American Pipit numbers were already building nicely.

Just a brown bird? There’s something so completely striking and intricate about the American Pipit. Copyright Christian Artuso

We gathered around, I gave a stirring speech to rally the troops. Following this outpouring of Shakespearean prose, the group seemed just glad to get moving.

Seventeen people showed up, and we are extremely thankful to every single one of them. Unfortunately, Joanne, our instigator in chief, had to work. We did encourage her to ‘pull a sicky’, but she has far too much integrity to do that! The walk along the shoreline was, as ever an opportunity to view some avian treats. Usually these events are defined by the gatherings of Rusty Blackbirds. Not this time though. Warblers, Horned Larks, American Pipits, and various other songbirds seemed to be hiding in the willows.

A Palm Warbler appearing to take shelter from the wind. Copyright Christian Artuso

Our plan for weeding was to widen the large open sandy area midway along the bar, in the hope that we would one day make an area so clear, a Piping Plover would inevitably have no choice but to breed here. 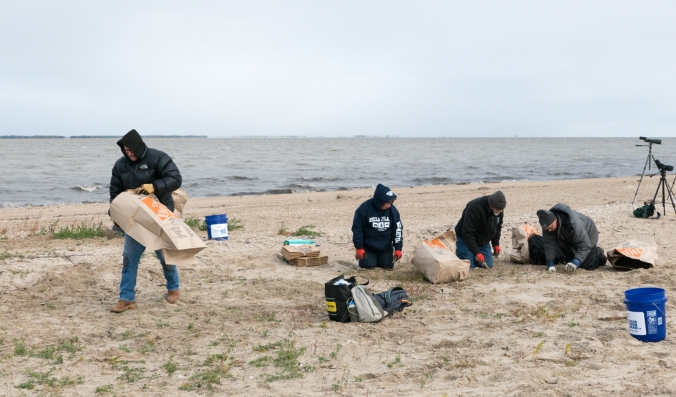 Volunteers give up their tripods and scopes and get to work. Note the short vegetation, a sure sign that we are getting somewhere. Copyright Lynnea Parker

The vegetation was pretty clipped, one would assume it was young, and easily pulled. That would be a mistake. The clover was rooted deep into the ground, having more than one season of growth for certain. To remove the roots meant to dig down, grapple with the root and then twist it around your hand, before teasing it out. It often took over a minute to pull a single clover. Hard work, rewarding, and probably a good way to keep warm in the circumstances. 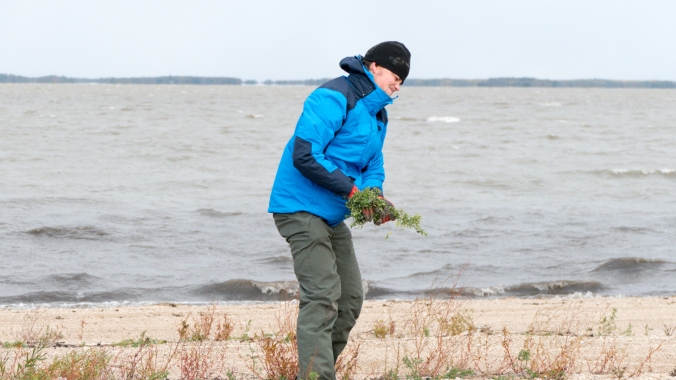 Come on Tim, it can’t be that hard. Photo copyright Lynnea Parker

It seemed like slow work. Each bag was slowly filled with willows, clover and burdocks. In fact, over 30 bags, possibly as many as 40 bags were filled. An average of over 2 per person was some going for a cold day.

Peter having an argument with a Home Depot bag. For clarification, we in the Manitoba IBA Program show no preference for selecting bags, and would like to assure members of the public that garden bags can be purchased from a number of different hardware and garden establishments. Canadian Tire did seem to hold up better though. Copyright Lynnea Parker

Lynnea took some wonderful photos of the group working, and we could not select just one or two to show off, so here is a selection of some of the best ones. 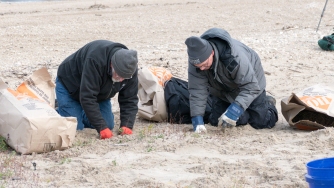 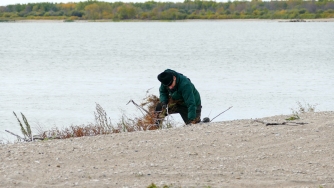 Each bag was dragged into a pile including the bags from our August weed pull, and these are to be burnt by staff from Manitoba Sustainable Development.

Pulling bags to the burn pile. Has anyone else noticed that Lynnea spent an awfully long time taking pics? Copyright Lynnea Parker

At some point in the morning, the attention shifted from pulling the shorter stuff, to pulling anything with a flowering head, and then to targeting the willows rooting along the beach. These plants are rhizomous, meaning that the underground roots are capable of producing new shoots, and new plants (although the new shoot is genetically the same as any other willow on the same root system). We found an efficiency in pulling along these root systems. We also realised that the willows were stabilising the sand bar, and their removal might make the sand less compact, and therefore reduce the seed bed for the weeds.

Tug of war over a willow root. Copyright Lynnea Parker

We wound up around midday, following the customary group photo.

Everyone trying to not look too cold. Copyright Lynnea Parker

At this point we began the process of clearing up, making it appear as if no one had ever been there.

It was fortunate that we persuaded Christian that a bunch of sticks was not going to be an appropriate gift for his wife. Copyright Lynnea Parker

And came to the most important point of the day – the trip to the tip and the chances of finding some birds. Around half the group headed for warmth, but us brave souls wanted to see more birds. Lynnea had to be persuaded by the promise of some snack bars – and she calls herself a birder! The first species was the pale, bustling Sanderling, a species most at home scurrying around in the surf at the waters edge.

Sanderling, one of the few defenses against zebra mussels? Copyright Tim Poole

Walking further up the beach, revealed more birding treats. Horned Lark are not exactly a rare find in Manitoba over the summer, but they rarely show this well.

Another great spot was a Blackpoll Warbler. 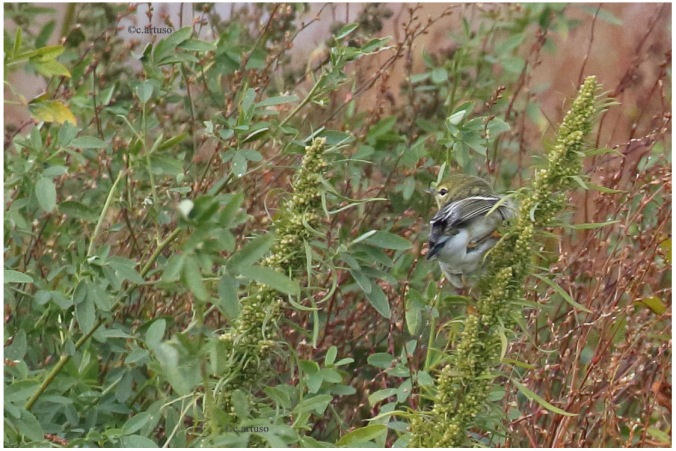 To the tip we headed. Peter D. passed us with some exciting news, an opportunity that we would knot be able to turn down.

A group of shorebirds raised the excitement levels, but they disappeared. Had Peter’s birds escaped us? Fortunately not. Two juvenile Red Knots, a globally Near Threatened and a nationally Threatened species were foraging with a juvenile Black-bellied Plover  at the tip of the bar. As with the Sanderling, these are High Arctic breeders.

After 20 minutes and a cumulative total of about 1,000 photos between five of us, we were heading back. Lapland Longspurs were getting quite abundant by now.

Excitable moment three followed soon after. Lynnea had found a Western Sandpiper! It disappeared – would we ever find out whether she was right? Some shorebirds landed behind us, and suddenly we had it in our sights. Christian was convinced – a Western it was! Christian – and the rest of the group for that matter – had briefly taken leave of our senses, and forgot the basic first question for identifying small sandpipers. Christian is a fine teacher – and had taught me to look at the ratio of wing length to tail before proceeding with identification. This bird had long wings projecting far beyond the tail. It was either Baird’s or White-rumped. In fact it was the latter, due to the bright patterning, indicative of a juvenile at that. Alas, Ray kept his jig of delight for another day…. 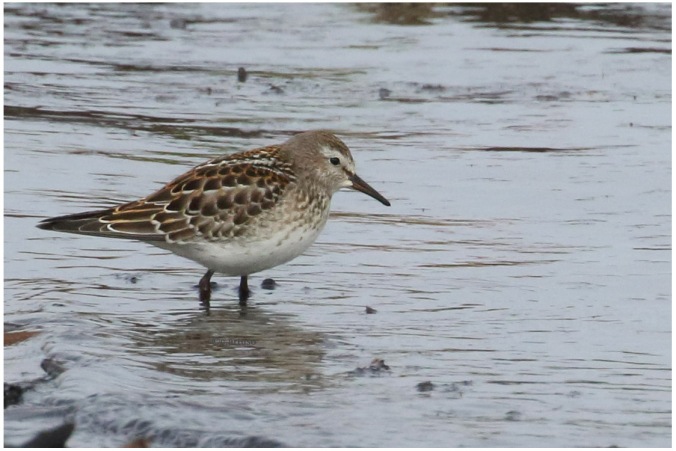 Look at that projection! Note the wings project beyond the tail on this White-rumped Sandpiper. Also note the orange on the base of the bill, and the highly patterned back. Copyright Christian Artuso 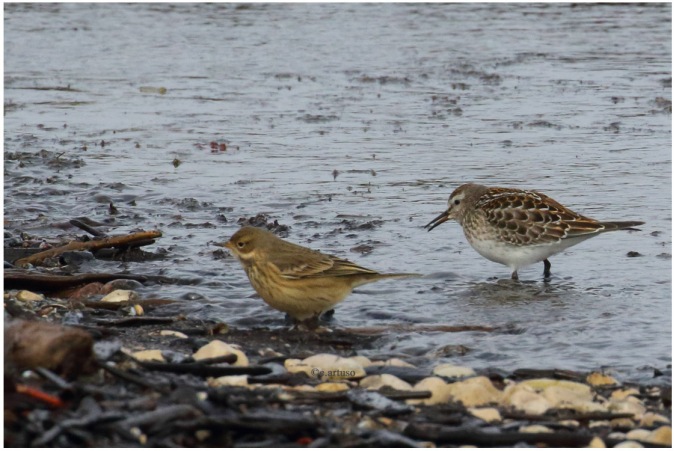 Excitement over, we returned to the parking lot, returned to the cars, and returned to a warm drink. It was a fantastic effort by everyone, over 30 bags filled, and some great birds for those of us who stuck around until the bitter end.

Thank you to the brave 17 – your efforts were greatly appreciated! Thank you also to our various funders, including Environment and Climate Change Canada, Manitoba Fish and Wildlife Enhancement Fund, TD Friends of the Environment Foundation, and Noventis Credit Union.

Here to the critically important final bird list of the day (see here, here and here).