Tucked in the shadow of Riding Mountain National Park, Proven Lake is the type of place which you might drive past on the road to and from the Park. But take a look, and you might find an interesting place, of Yellow Rails, Le Conte’s Sparrows, Bobolinks, and Alder Flycatchers. Beavers can be spotted here, and even the occasional River Otter. Proven Lake gives you an opportunity to find great birds from spring to fall, and even into winter.

It is fall and maybe not the best time to find some of the treasures named above, but then again, fall is often the time to get up early, visit wetlands, and watch (and count) the extraordinary numbers of waterfowl departing in search of a good meal. Others have commented that Proven Lake shelters hundreds, nee thousands, of waterfowl in fall, and we would encourage anyone staying in that area to get out, and take a look.

Manitoba Sustainable Development have in fact built a trail on Proven Lake. It is little used, and likely to be a bit overgrown, but in mid-summer, apart from the ticks, it provided a great birding walk.

Below, we share maps, and a bit of information about this little known IBA.

Proven Lake is reached by driving north on Highway 10 from Brandon. Turn to the west when Highway 10 meets number 45, and you are almost there! Rather than turn onto the 45 itself, immediately take the gravel road to the north, and head along here. The lake is to the north. 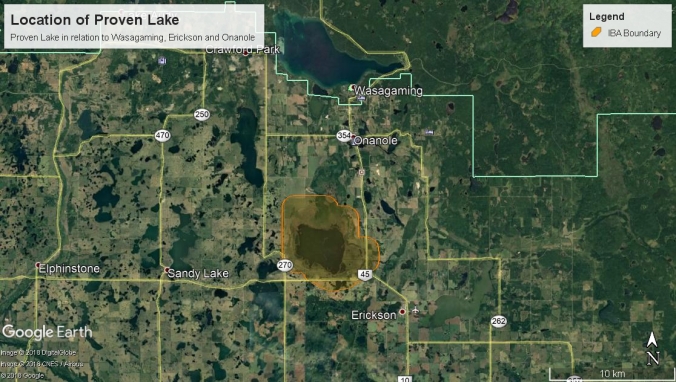 Soon the lake appears. You can see a possible Franklin’s Gull colony on the lake in this area. Of interst to most birders, the habitat here for Yellow Rail looks superb!

Sedge meadows beloved of Yellow Rail and Le Conte’s Sparrow, among others.

Continuing to head west, you come to the trail. This can be accessed on a road heading north, and you will be able to recognise it as it’s well signposted (see below).

Pull into the parking lot, and you face an information sign with an image of the IBA-designate bird, the Black-crowned Night Heron. The original designation pertained to a huge colony of over 300 nests, counted in 1966. In 1995, there were still 200 nests. This represented around 4% of the estimated Canadian population of this species.

The information sign on the way into the trail. Copyright Tim Poole 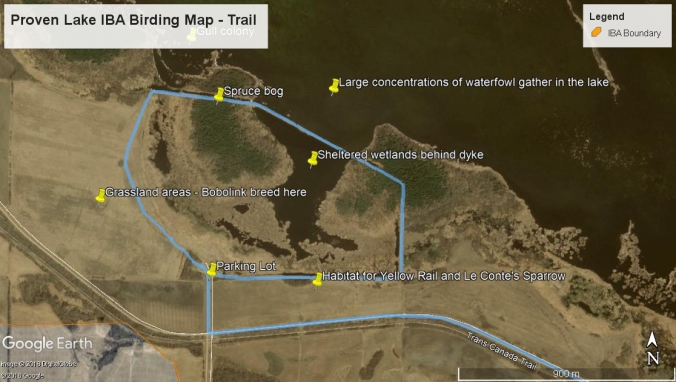 Close up of the trail track taken form a GPS.

Setting out along the trail, you come across a variety of habitats: broadleaf woodland; agricultural land, notably hay meadows; spruce bog and; wetlands including cattail marshes, sedge meadows and open water. 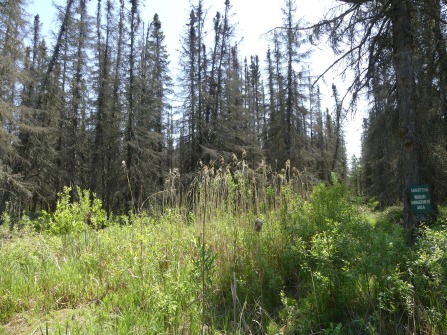 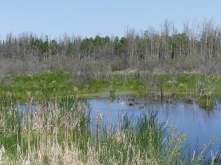 The hay meadows host Bobolinks, Brown Thrasher, and other generalist open ground bird species. These drop into sedge meadows closer to the lake, and this area was notable for its Yellow Rails during the Manitoba Breeding Bird Atlas. Le Conte’s Sparrow are also found here. The lake has hosted large colonies of Franklin’s Gull in the past, at least 800 nests (a modest 100 individuals were noted in summer 2018). Eared Grebe has bred here in significant numbers as well. Being so close to the National Park, a number of warblers can be spotted in migration, as well as some of the typical aspen parkland breeding species, such as Black-billed Cuckoo and Least Flycatcher. Areas of willow scrub, and dead conifer trees are ideal for flycatchers, Alder’s certainly breed here. The cattail marshes also host American Bitterns, and hide breeding dabbling ducks.

The varied habitat along the trail provides habitat for a host of species. Beaver lodges are noticeable along the channels, and muskrats are present in the cattails. The diverse habitats are also great for invertebrates (although in spring and summer, watch for ticks). Please though be Bear Smart – this is after all in the shadow of Riding Mountain, and this area is very much known for its bears.

Although all the above were taken in June, there is a need to do more monitoring at Proven Lake. Many visiting birders drive straight by it, heading into the boreal treasure trove that is Riding Mountain National Park, and in a way, who could blame them! BUT, Proven Lake is certainly worth a look, and the area here is very much under-birded. You will find species such as Great Gray Owl in the conifer trees along the trail, and it is an ideal spot for the elusive Yellow Rail, so why not stop here next time you come by? In terms of fall priorities, if you are visiting the area, why not take an early morning trip to one of the points on the map below, and count the waterfowl as they leave the shelter of the lake and marshes, and go to feed for the day in the surrounding grain fields? If you are really adventurous, why not try to get a group of people out, and try to count from more than one spot? You might be surprised at the numbers you find!