On Thursday May 24th 2018, organizations, biologists, and volunteers met on an impressive Nature Conservancy of Canada (NCC) property named Jiggen’s Bluff to start the second day of the Shorebird workshop. If you missed our blog post featuring the first day of the workshop, you can read it here. The MB Shorebird Conservation, Management, and Monitoring Workshop was organized by the Manitoba Important Bird Area (IBA) program, Manomet Shorebird Recovery Program and NCC, bringing together around 25 participants. A few main objectives of the workshop were to work on shorebird identification, connect shorebirds migrating/using the Central Flyway, address threats, and establish a long-term International Shorebird Survey (ISS) in Manitoba.

The schedule for the second day of the workshop was modified due to changes in the weather forecast. The original order of events would have had us watching presentations in the morning, with a trip to Whitewater Lake in the afternoon. To avoid the impending rain we all met at Jiggin’s Bluff at 8:30AM for a presentation by Brian Harrington on Flock Estimation. After discovering how terrible we could be at estimating flock sizes (and realizing why continuous practice is so important), everyone hopped on the bus and headed to Whitewater Lake.

At our first stop we had 13 species of Shorebirds including: American Avocet, Semipalmated Plover, Killdeer, Marbled Godwit, Ruddy Turnstone, Stilt Sandpiper, Baird’s Sandpiper, Least Sandpiper, White-rumped Sandpiper, Semipalmated Sandpiper, Wilson’s Phalarope, Red-necked Phalarope, and Willet (complete checklist). Everyone split into groups to ID and count. After everyone had finished their tally, results were compared. Aside from slight variation, which can be due to a difference in detection as birds come and go, results were quite even across the groups. A challenging species to count was the 160 Red-necked Phalarope which flushed regularly and were actively feeding in a large groups with new individuals arriving throughout our observation period. The 20 Ruddy Turnstone were well camouflaged where they were foraging in the bare agricultural field, with some groups not noticing their presence until the very end! 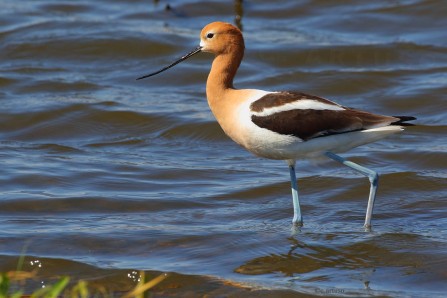 At our second stop we had 12 species of Shorebird, with 3 additional species: Hudsonian Godwit, Dunlin, and Lesser Yellowlegs (complete checklist). We were also quick to note the 2 Greater White-fronted Geese present. This location was not the best for learning opportunities due to the harsh glare of the sun and the distance of the birds, so after taking account of the species we moved on to stop 3.

At the third stop we had 15 species of Shorebird, with 2 additional species: Black-bellied Plover and Long-billed Dowitcher (complete checklist). The Long-billed Dowitcher was a fantastic find, and we spent a good amount of time examining this bird which was foraging with 6 Marbled Godwit and a single Hudsonian Godwit. The close-up scope views of the Marbled Godwit and Hudsonian Godwit provided a unique opportunity to compare these species.

Our last stop landed us at Sexton’s Point, an area known for Western Grebe, Clark’s Grebe, and Great Egret. We were rewarded with 2 Clarke’s Grebe which are considered uncommon in Manitoba. Although uncommon, Clarke’s Grebe are known to breed at Whitewater Lake and sometimes even hybridize with the locally abundant Western Grebe. At this location we had 1 additional species of Shorebird: American Golden-Plover (Complete Checklist). Out on a distant spit of gravel, 20 American Golden-Plover were resting with a flock of 180 Black-bellied Plover. It is always a treat to see these two species in spring migration.

Additional species seen throughout the morning can be found on this checklist.

In the early afternoon we found ourselves back at the Jiggin’s Bluff house for lunch and continued presentations. Monica Iglecia started off the afternoon talking about threats to Shorebirds and the status of Shorebird populations. It was alarming to learn that 40% of Shorebirds globally are experiencing declines. In North America, 40% of our Shorebird species are in decline, highlighting the need for a central flyway Shorebird monitoring program. Manitoba is located in the central flyway, and our establishment of an International Shorebird Survey (ISS) will fill a gap in regional, continental, and global monitoring efforts.

During the presentation a considerable hail storm descended upon the area, which captured everyone’s attention. As it turns out, we were correct in changing our schedule to do field observations in the morning!

Rebecca Neufeld presented next on Threats and Habitat Priorities in Oak Lake and Sandhill Conservation Plan. Issues that were identified for this area included the threat of Zebra Mussels establishing in the lake, invasive species management (focus on plants), fire suppression, and the encroachment of woody species in grassland areas.

Our third presentation of the afternoon was an Introduction to Shorebird Management by Brad Winn. Brad explained that Shorebirds often respond rapidly to beneficial management. The three core needs of a migrating Shorebird were identified as:

Conservation of Shorebirds means addressing these needs, and ensuring that they can be met. Brad explained how Manomet works with local communities around the globe to establish Shorebird conservation initiatives. An important take-home message from this presentation was that managing for wildlife frequently means changing human behaviour, attitudes, and policy. It is a long process that one must be prepared for!

Christian Artuso was the last presenter of the day, speaking on the need for ISS monitoring in Manitoba. Christian explained why southwestern Manitoba was an exceptional location for migratory Shorebirds. He described how Manitoba’s current wet cycle and numerous ephemeral wetlands provided reliable (but constantly changing) habitat. Whitewater Lake itself is a vital stop-over location in the central flyway. Christian further highlighted that most of the Shorebird research in the province has been conducted in Churchill (northeastern Manitoba), with little attention being given to the southwestern region.