Geese are some of the most recognisable and numerous birds found in IBAs across Canada. Perusing the on the IBA Canada website, you will notice that geese are significant trigger species for a number of Manitoba’s IBAs – I make it 12, so around one third. It is likely that the Canada Goose makes an appearance in every one of Manitoba’s IBAs each year, with the possible exception of one or two of the rockiest and more remote islands on Lake Winnipeg.

Given all of the above, one may come to the conclusion that counting geese is not important. In fact, we could argue that there is little purpose to giving geese any attention. BUT these large concentrations of geese are among the highest concentrations in North America. Geese are also likely to be a good indicator of some wider environmental issues (pollution, wetland loss, habitat changes and overexploitation for example – ok little chance on the last one right now). Collecting accurate information on goose concentrations in our IBAs not only contributes to our long-term understanding of their populations but also helps us to identify issues within individual IBAs.

It is with this in mind that 6 people gathered at 4 different points around the Netley-Libau Marsh IBA in October to count the geese as they left their roost in the morning. The Netley-Libau Marsh was historically considered to be one of the most important resting areas for migratory geese, primarily Canada and Snow, in the central flyway. In recent years attention has shifted understandably to the showstopper scenes at Oak Hammock Marsh and it appeared to be a good time to see what was happening at Netley-Libau.

This was very much a trial – but we hope to expand this principal to other IBAs in future years. The objective was simple: to test the methodology at Netley-Libau and identify ways to improve the approach for future years. These experiences will hopefully be transferred to counting other sites in 2018.

Netley-Libau Marsh is the largest inland coastal marsh in North America. The flow of the Red River through the centre and into Lake Winnipeg effectively splits the marsh into two distinct areas: Netley Marsh and; Libau Marsh.

Such a large area is hard to cover with few people – we had three groups on the Netley side and one on the Libau side. 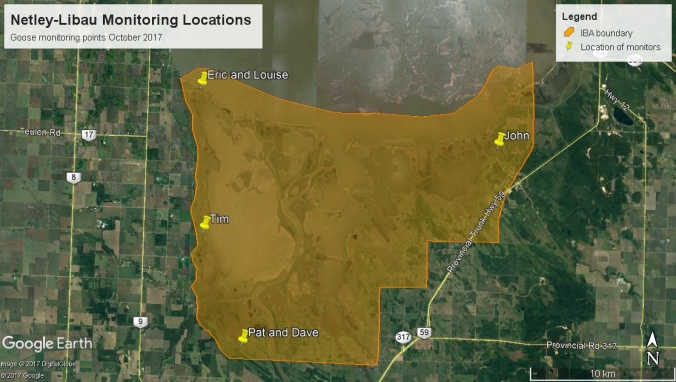 A glorious morning with calm bright conditions made it perfect for waterfowl counting. Eric Smith and Louise Buelow-Smith counted the geese as they headed northwest over Chalet Beach. They counted 1,100 Canada Geese in total. 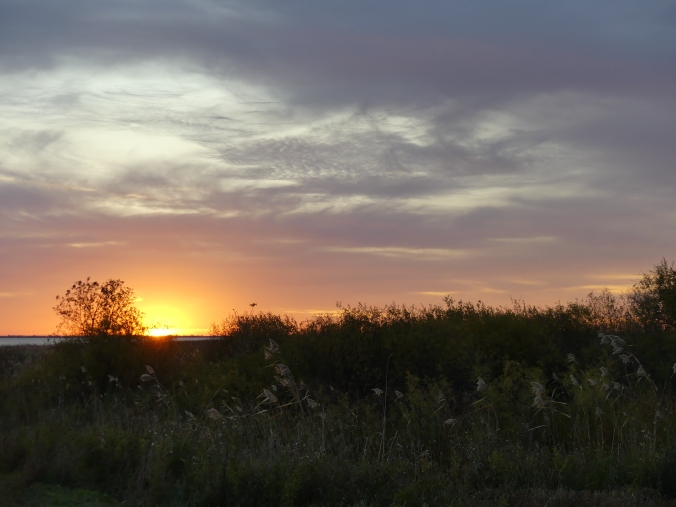 A few miles south of Eric and Louise, Tim Poole stood at the end of Henry Road. This area had the largest counts of the morning with Snow Geese, Cackling Geese and Canada Geese present. This is one of the few spots with good views of the water. However, views were  impeded by trees and bushes. Total counts included 1,115 Snow Geese, 289 Cackling Geese, 2758 Canada Geese and 1,565 Ring-billed Gulls.

A third group, Pat and Dave Wally took up a location south of the marsh and west of the Red River. They saw fewer birds leaving from here, perhaps as they were further from grain fields. This was a good future lesson: position your volunteers in areas between the marsh and good feeding. They did however see 1,240 Canada Geese, 540 leaving the marsh and a further 700 in fields as they left the area. This is interesting as it suggests that a combination of standing observation followed by checking a few blind spots afterwards might be important.

Due to a lack of volunteers, we were unable to check the Libau side as thoroughly as we would like. We did however have high hopes that there might be good numbers of geese. The actual marsh here is more functional than the Netley side, and Christian Artuso had counted 1,975 Canada and 4,128 Snow Goose on the northeastern corner the previous weekend. Surely it would turn up something good! John Hays turned up full of hope and was left standing almost alone – only 26 Canada Geese flew over for company – bizarre! Still, there were several hundred Canada Geese by Patricia Beach later in the morning. What would have caused such a large fall from Sunday to Thursday? Maybe a change in the wind direction? Maybe a shift in foraging area from east to west? Maybe the geese migrated? Whatever it was, it goes to demonstrate how dynamic migration can be.

Before moving on, another lesson learned was that it probably doesn’t pay to be too close to the action as birds leave a marsh. A panoramic view across grain fields on the west side of the IBA will probably in all likelihood provide a wider field of vision than a closeup but restricted view. The grid system of roads in this area might lend itself to positioning a counter at every second mile road giving a very large view across the area. Here is a possible ideal scenario monitoring map for future years. Preferably with 2 volunteers at each point – a caller and a counter – but if necessary with a single monitor.

Louise had found out that the Red River Basin Commission were going to lead boat trips to Netley-Libau Marsh, an area which has become degraded over decades. Louise, Eric, Pat, Dave and Tim attended following the goose count. The event was led by Dr Gord Goldsborough, Associate Professor in the Department of Biology at the University of Manitoba, Dr Richard Grosshans from the International Institute of Sustainable Development,  and Steve Strang, Manitoba Director for the Red River Basin Commission. This was a fascinating opportunity to see the state of the marsh and hear firsthand from about the various influences which have led to the current state of the marsh.

From the boats – a flotilla of local boat owners had been hired for to take us out – our first point of call was the Netley cut. This is a small cut which was created in the 1920’s to allow access from the river to Big Netley Lake. Unfortunately a narrow cut has grown to become a very wide opening effectively flooding the marsh at this point with river water. A cursory glance (past the pelicans and gulls on the sandbar) demonstrated the issues succinctly: a lack of emergent vegetation (e.g. cattails, phragmites, bulrushes and sedges) and some very choppy water. 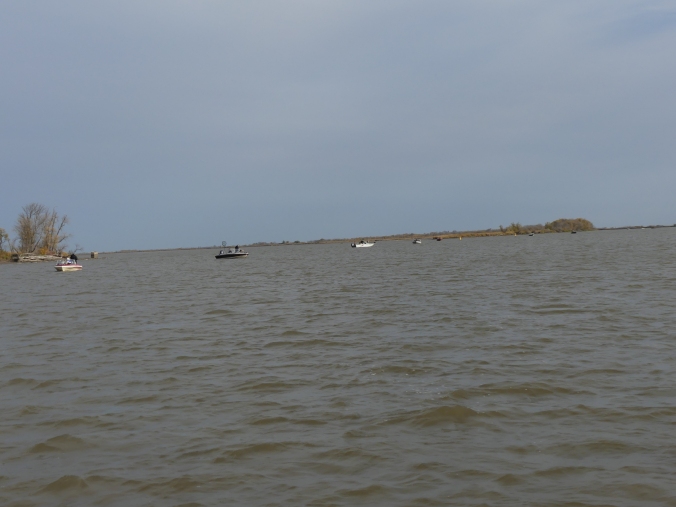 A view of the Netley Cut. Note how open it is, Copyright Tim Poole

Continuing north we learned that the issues affecting the marsh were complicated: Lake Winnipeg Regulation creating elevated water levels and preventing drawdown; the cut; nutrient load; weather and climate impacts and; isotonic rebound (glacial melt in the north is causing the lake to ’tilt’ towards the south). These issues add up to a marsh which is deteriorating and at risk of losing the functionality which makes marshes so important for communities and wildlife. Wetlands after all provide us with a high number of ecosystem services. Loss of these functions in an already struggling watershed will impact on everyone and everything in the area. For example, consider the issues with phosphorous loading in Lake Winnipeg. Functioning wetlands act like kidneys, absorbing these excess nutrients before they reach Lake Winnipeg.  Netley-Libau should be part of the solution to the many issues in this area – but only if it the marsh regenerates. 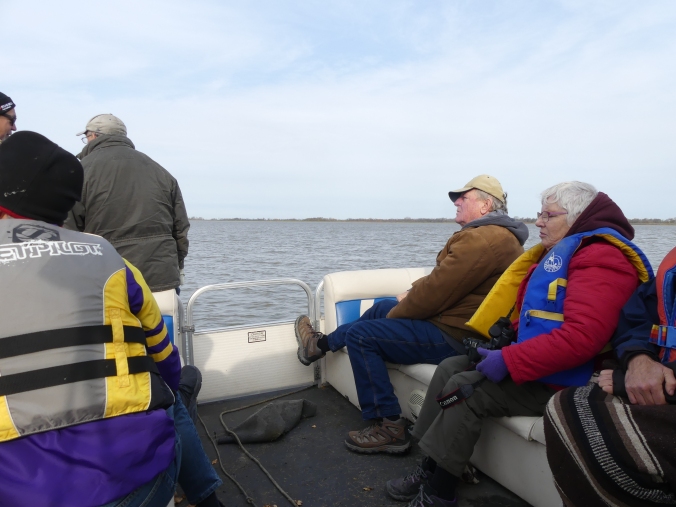 It was pretty cold out on the boat! Copyright Tim Poole

We finally ended up at the north end of the marsh near where the river opens into Lake Winnipeg. We were told about the historic use of dredging to keep the channels open for boats (there are 3 channels entering Lake Winnipeg). Dredging is controversial when used in some locations, and it is certainly not our intention here to get into a debate about the good, the bad and the ugly of this management. However, we are also facing a critical situation in this watershed. Silt is building up in the channels, some natural but much due to human-induced erosion.

The plan here is dredge, remove the silt from the channels and try to create artificial reefs in the marsh on which emergent vegetation can begin to grow. If this could be made to work then the marsh might begin to regenerate in places. It certainly would not deal with all the issues at Netley-Libau but it might begin to mitigate for some of the impacts. This idea is certainly creative and worth exploring – something needs to happen in this marsh before it is too late. So best of luck to everyone involved!

For more information on this please take a look at the Red River Basin Commission website.

Finally, the following is the Red River Basin Commission conclusions from the day: