Day 4 of the IBA Churchill trip and again we kick off with a trip to Cape Merry for a sweep of the birds along the coastline. Bonnie worked her way across the shore and Tim abandoned her for an opportunity to watch the Belugas in the water below. It was quite a sight! There were good numbers of white adults and grey juveniles (sorry Raffi, you’re wrong) in moving with the tide in front of us. Also in attendance was a large raft of Black Scoter, good numbers of Red-throated Loon and the usual mix of Surf Scoters and White-winged Scoter. 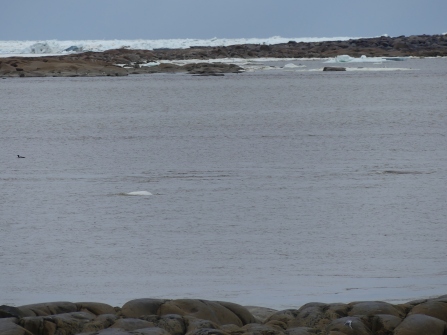 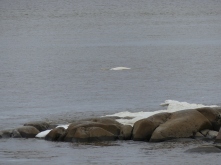 There were also Tundra Swans present in large numbers throughout the day.

Cape Merry is a place full of wildlife. For example, look below and you will see from the video below the scattering of loons, eiders, scoters and mergansers around the pods of Beluga.

From Cape Merry we headed eventually down towards CR30 on the Hydro Road in the hope of finding some interesting gulls. As the Hydro Road turns into the road at Goose Creek we checked the swallows and were pleasantly surprised to find a Barn Swallow and a couple of Bank Swallows feeding with the Tree Swallows. These species are rare in the north and even the Tree Swallow is only becoming more abundant thanks to Dr Kit’s bird house program.

One of the most vivid and stunning ducks one could expect to encounter is the Surf Scoter. This is a sea duck which breeds in boreal ponds and lakes. Crossing Goose Creek we noted there were two males and a single female, a situation which would never end well. Unsurprisingly, the two males were in the midst of a battle over the single female, bad for one of the males, great for those of us fortunate to watch them.

Our primary hope was to find Little Gull. Just past the bridge we had not found Little Gulls but the Bonaparte’s were still showing up well.

Couple of Bonaparte’s Gull. We would search the feeding Bonaparte’s for Little Gull. Copyright Tim Poole

Driving through what should have been small wetlands which were no been enveloped in the Churchill River we eventually spotted our target species. A Little Gull looks much like a Bonaparte’s but lacks the white eye ring, has a more extensive hood, is smaller and most noticeable, is dark underwing. Two Little Gull were feeding in a small wetland behind some trees feeding with Bonaparte’s Gulls. In total we would find six that day, a not too shabby number given there are only around 200 breeding in North America.

A count at CR30 put up good numbers of scoters (all three species), loon and another Little Gull. At this juncture the weather was beginning to turn and we were forced to drive back as the rain began to come down.

We were able to see the Surf Scoters one more time and in the same area there was even a pair of Black Scoter.

Further north as the rain really began to come down we also found a couple of feeding Short-billed Dowitcher. For anyone unfamiliar with this species, it has a very distinct ‘sewing machine’ feeding motion, its head probing in and out of the water at a steady tempo. Almost metronomic one might say! 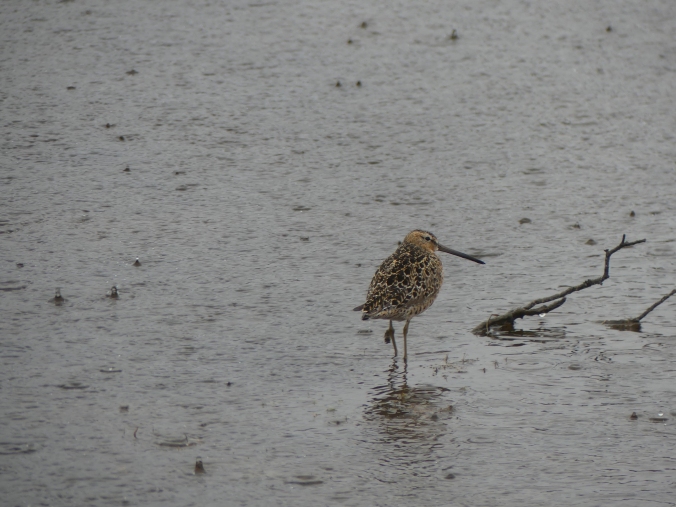 The weather deteriorated to the extent that we were forced to cancel our evening bird walk. The wind and rain making it almost impossible to see let alone watch and talk about birds. This was a shame as our walks had thus been very well attended. However, we had a good day with a good bird walk and we did get to meet some folks at Parks Canada. The daily bird list saw counts of over 1,000 birds and 55 species with Little Gull certainly being the highlight.