Following the Oak Lake blitz was the Sunday Whitewater extravaganza. As expected for a fabulous birdwatching area such as Whitewater Lake, the overall bird list was long and included some real gems. In total 28 species of shorebird were recorded, an impressive total. 19 people came along for the day, an what a day it was as well! The lake water levels were very high but the birds still concentrate in huge numbers. 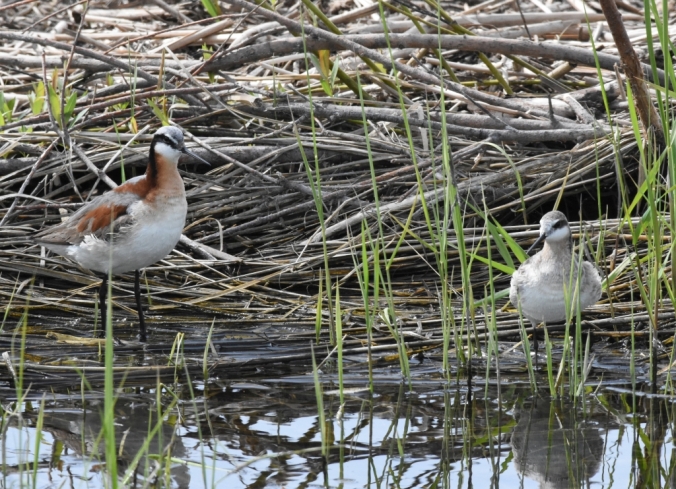 Wilson’s Phalarope were one of the more abundant shorebirds at Whitewater. Copyright Aaron Mooi

The western group, including Tim Poole, Patricia Rosa, Jen Wasko and the star of the team, 6 year old Anna Wasko, never managed to find the lake but did find an impressive 21 species of shorebird in the ephemeral wetlands and potholes. Included in this total was a single Whimbrel picked up in the scope at distance (‘I know my Curlews’ said he). Anna was the blackbird and shoveller counter (she seemed to have a special affinity for shovellers). In total there were 52 Shovellers, 287 Yellow-headed Blackbird and 900 Red-winged Blackbird in this area, so she obviously has very good arithmetic! Other highlights included a single Hudwit (Hudsonian Godwit for the non-Brits), great views of Red-necked Phalarope and a poser of an Upland Sandpiper.

Along the south of Whitewater Lake, Bonnie Chartier, Glennis Lewis and Liz Shewchuk managed to record 74 species including half a dozen Cattle Egret and 150 Western Grebe. On the raptor front, they also managed to get a late view of a Sharp-shinned Hawk. 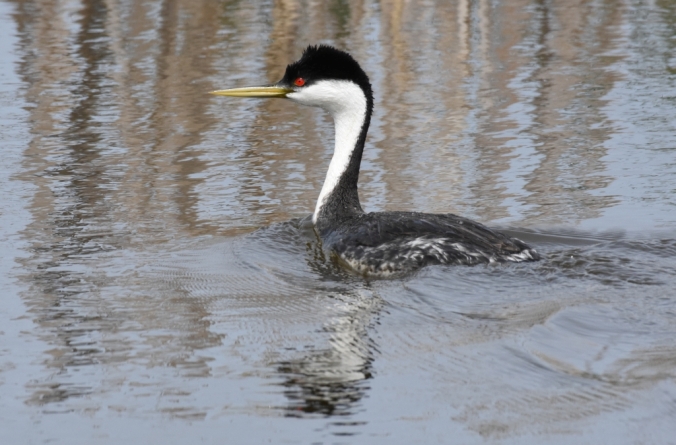 Birding along the western edge, Pat and Dave Wally were joined by Lynnea Parker. This area covers not just the western shoreline, with some interesting roads, but also a large number of potholes and ephemeral wetlands. These areas can be incredibly rich for birds. Among the highlights were a Stilt Sandpiper among the 12 species of shorebird and very good numbers of both Western and Eared Grebe, plus smaller numbers of Horned and Red-necked Grebe.

The north of Whitewater was split between our caretakers Colin and Gillian. Colin was joined by Louanne Reid and lucked out with both Clark’s Grebe and Glossy Ibis, two rare species for Manitoba. Colin’s eBird notes say that:

‘On arrival at 6.15 a.m. and before the count began we heard or saw four Black-Crowned Night Herons, a Peregrine Falcon, White-faced Ibis, American Bittern and a Willet–a clue that today was going to be another good one at Whitewater.  Other wildlife observed: deer, fox squirrel, mosquitoes, wood ticks and other insects.’

They managed to find 262 Western Grebe, another 6 Cattle Egret, 18 species of shorebird and a couple of Peregrine. Of the shorebirds, most impressive were the large concentrations of Black-belled Plover, 191 in total. They also noted 100 Dunlin, 85 Ruddy Turnstone and a single each of Red Knot and Sanderling.

Clark’s Grebe – notice the black cap does not extend below the eye. The back is also greyer than Western Grebe and the flanks paler. Photo copyright Christian Artuso

West of Colin and Louanne, Gillian was joined by the Barclay’s, Ken, Colleen and Dan, for the morning. As well as a stunning show from a Black-crowned Night Heron (see below), these guys really lucked out on the Black-bellied Plover, a total of 340 spread across several flocks. This species, a High Arctic breeder, is often synonymous with shorter grassland habitats during migration. 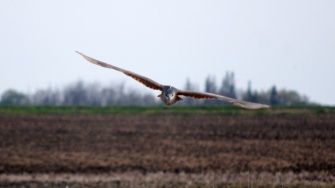 The eastern edge of the IBA was surveyed by Christian Artuso, Randy Mooi, Curator of Zoology at the Manitoba Museum, Aaron Mooi and Emily MacKintosh. Another Clark’s Grebe was detected at this end of the IBA. Franklin’s Gulls, over 4,500, were extremely numerous. A Prairie Falcon and a Snowy Egret also put in an appearance. 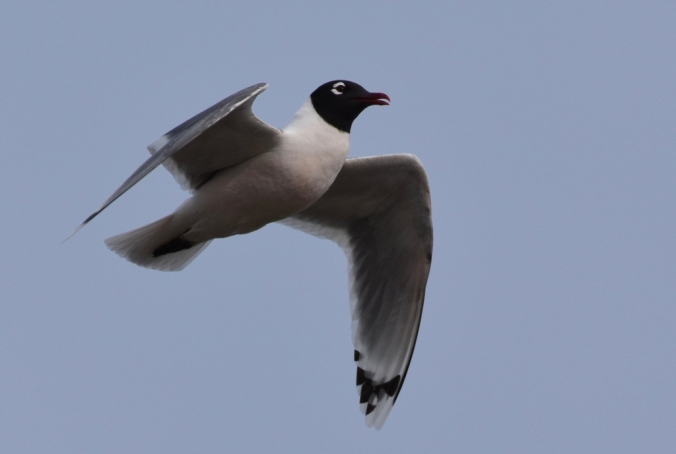 This group also scored 377 Western Grebe, a not too shabby 122 White-faced Ibis, 5 Red Knot, 422 White-rumped Sandpiper and a California Gull bringing a total of 88 species.

So to our final scores, we recorded a total of 136 species and 23,423 species. The most numerous species was the Franklin’s Gull with 5,561 individuals counted – probably an underestimate of the total. There were impressive numbers of Western Grebe, White-rumped Sandpiper and Black-bellied Sandpiper as well. Even the Snow Geese stayed for the fun! Mallard were unsurprisingly the most numerous duck, followed by Northern Pintail. White-faced Ibis also numbered at least 225, less than the August count but still very impressive. Here is the final list:

It was a slightly surprising to turn around and see this lone Snow Goose sitting in an empty tilled field. Photo copyright Tim Poole 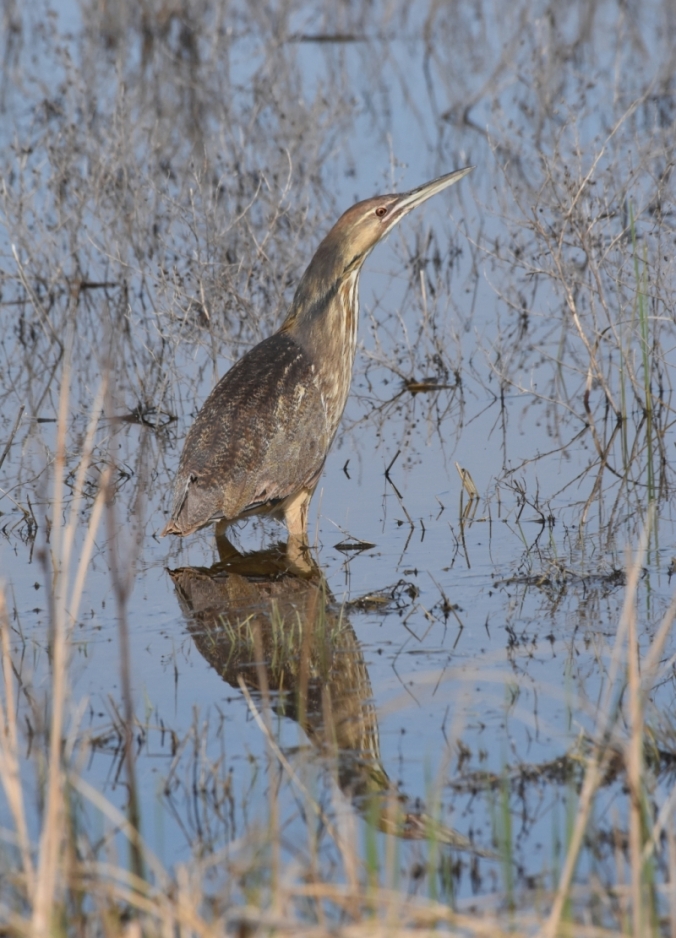 Not sure if there’s a bird here or not? If it is a bird, then it must be an American Bittern. Copyright Aaron Mooi

Video taken by Tim Poole of an American Avocet at Whitewater 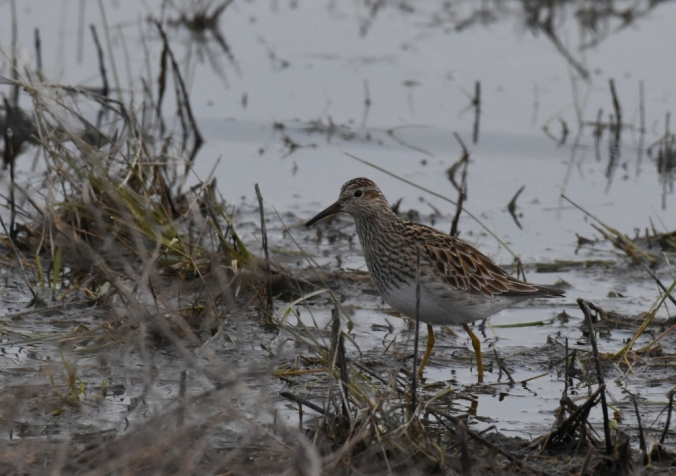 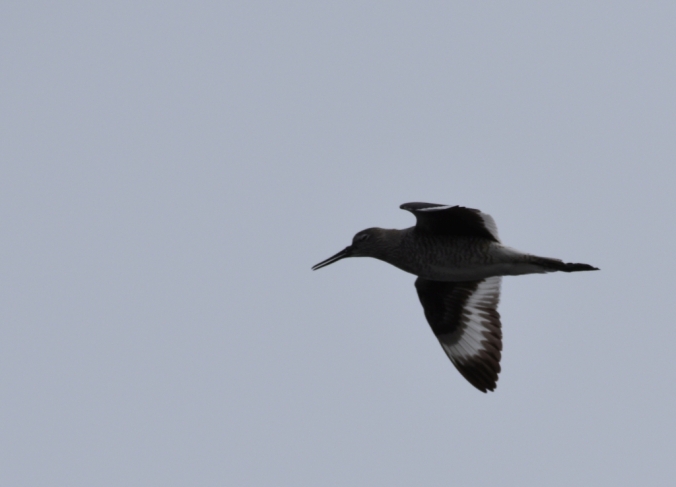 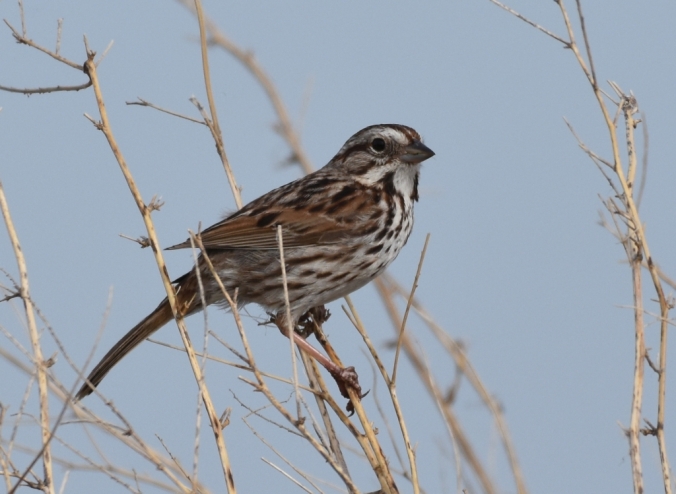 She’s hiding behind the goose! A moose in a field just outside Boissevain. Copyright Tim Poole 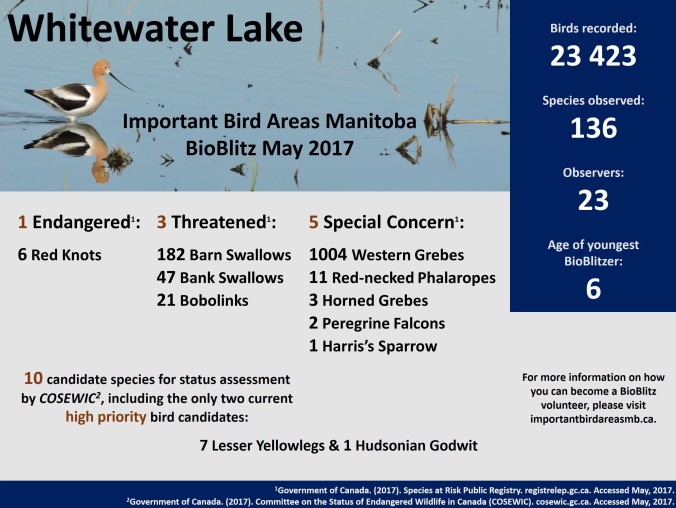