Rudolf Koes led a Nature Manitoba trip to Delta Marsh and West Shoal Lake, both IBAs on Saturday April 22nd. Garry Budyk has kindly let us post the results and a few of his photos form the day. What is really interesting is how many more birds were present in the IBA due to the new boundaries. This is especially true of the PR227 dump, a hotspot for gull activity and now part of Delta Marsh IBA. Other checklists submitted within Delta Marsh IBA which were not previously in the boundary were at PR #411, St. Ambroise (hamlet), St. Marks, PR #227 and Oakland. Take a look below at the photos and the checklists submitted by Garry to eBird.

Also look out for photos of a funky hybrid gull and a couple of rare visitors to Manitoba in spring. 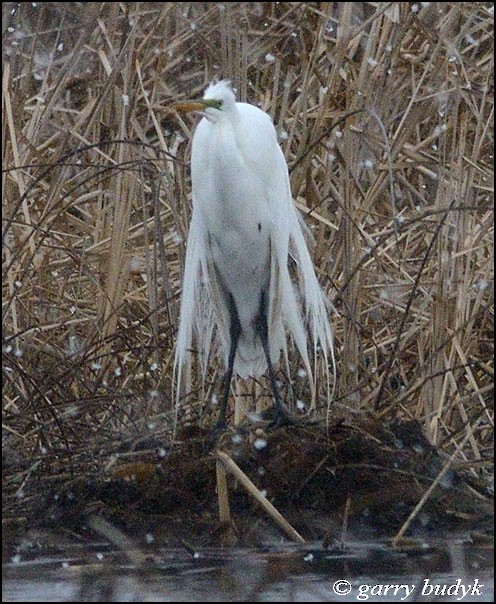 Now for the rare and unusual records for the day. First the rarities. The first is a Varied Thrush. This is a species which breeds in dense conifer forest of the Pacific northwest but is an occasional winter visitor to Manitoba.

Another annual winter visitor to Manitoba is the Townsend’s Solitaire. This species also breeds in the conifer forests of the Pacific northwest.

This Townsend’s Solitaire was spotted along PR411. Taken by Garry Budyk

Finally, gulls are seemingly one of the most regular source of at least noticeable hybridisation in bird populations. On this occasion at the PR227 dump a hybrid Glaucous and Herring Gull, also known as a Nelson’s Gull. Due to the unusual plumage Rudolf sent Garry’s photo to gull expert Amar Ayyash who gave the following reponse:

“… keep in mind that most hybrid identifications usually involve a good deal of guessing (educated guessing). Birds like this, with very pale gray upperparts are always suspected of having Glaucous influence. What gray-backed hybrid combinations are “expected” with Glaucous? Herring or Glaucous-winged. The pale eye suggests another pale-eyed species is involved, and the yellowish eye-ring helps point to Herring. Notice the outer primaries have a diluted dark gray pattern (like Kumlien’s Gull), something we often see in Glaucous x Herrings.”