Join us for an exciting blitz in the world famous Delta Marsh. We will be counting some of the specialty species of the area including shorebirds, grebes and wading birds. We will begin early and be finished by lunchtime

It is the time for our annual Riverton Sandy Bar weed pull. held in conjunction with IBA Caretaker Joanne Smith, this is an excellent opportunity to roll up your sleeves and help recreate the Piping Plover habitat for which this area was once known.  We’ll meet at 8:45 am at the parking area and then take the 15 minute walk out to the sandbar area together. We hope to pull weeds (which will most likely involve some birding) for three or four hours, depending on the weather. If you can even help for an hour or two, it would be greatly appreciated. Please bring gloves, hat, sunscreen, water and a bag lunch. Snacks and refreshments will be provided.

Below is an extract of the Express Weekly News announcing this excellent event.

Our fall program begins with an exciting opportunity to visit the excellent North, West and East Shoal Lakes. The data generated will give us a flavour of the populations of birds in this globally significant place for nature. Shoal Lakes IBA is a great place to see rare species including large wading birds, shorebirds and migrant water and songbirds. A late breakfast/lunch will be part of this package!

We will be running a few waterfowl counting events around the province. Look out for announcements in September. We also plan to run a new event – ‘The Great Sandhill Crane Search’. This will focus on an area from Virden to the southwest corner of the province and will take place in October.

On Sunday July 15th, the Manitoba IBA Program organised a blitz in the Kinosota-Leifur IBA. Our aim, to count the elusive and threatened Red-headed Woodpecker. Tim Poole, Manitoba IBA Coordinator describes what happened.

It’s 4am, and bleary eyed, I stumble out of bed and into my clothes for the day. Packing up the lunchtime picnic into a coolbox, it’s time to strike the road, to head to Alonsa, an area in the centre of one of Manitoba’s least known, but most intriguing IBAs. En route, I collected Lynnea Parker and Katherine Schulz, and we were soon on the Trans Canada, heading west past Portage la Prairie. As the dawn cracked, the birds came out, huge numbers of Franklin’s Gulls ‘hawking’ for food in agricultural fields.

It took over two hours to reach Alonsa. We met up with local Red-headed Woodpecker guru, Harry Harris. Harry was the instigator of this IBA back in the 1990’s. In Fact, Harry as manager of the Alonsa Conservation District had not only put together the information which led to the IBAs designation, he also spent much contributing to the species conservation, via advocacy, outreach, and conservation agreements. This was obviously the guy we needed on board for this search!

After talking one person up, it turns out I was not even in Harry’s group! Lynnea joined Harry, and local enthusiasts, Dick and Natalie Gordon. This was group C for the day, and no doubt this group were going to find a number of woodpecker territories. I had teamed up with Katharine and a new family for an IBA blitz, local shop owners, Frank, Lily and Mike Chen. They were new to the area, new to the woodpecker, but very keen to learn. We were the so-called group B and based to the south and east of Alonsa. In group A, Jo Swartz, Betsy Thorsteinson, Sabina Mastrolonardo and Christian Artuso headed north of Silver Ridge around Kinosota. Randy and Odette Mooi were in the southwest, having spent the night in a luxury pad in McCreary. This was our Group D.

As stated above, our intention was to target and find Red-headed Woodpeckers in suitable habitat. Fortunately, this is a species with quite particular habitat requirements. They require mature, scattered trees, usually aspen, some standing deadwood, or snags on living trees, little or no shrub cover, and very sparse understorey. This habitat is usually associated with cattle grazing, but can also be found in well managed yard sites. Fortunately, the Kinosota-Leifur IBA is one the premier places for this species in Manitoba, primarily due to presence of cattle in woodlots throughout the summer. 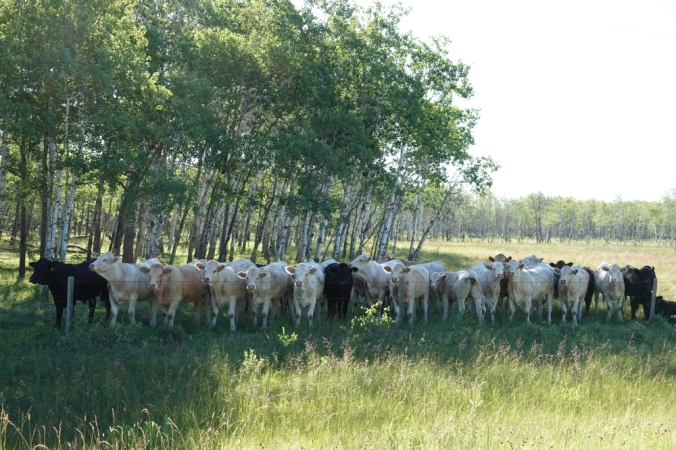 Cattle in a wood lot. This combination is the ideal place for Red-headed Woodpeckers (although these trees may be a bit too spindly). Copyright Randy Mooi

The plan for each groups then was to find the cows. Find the cows and you find the birds. Some of us seemed to spend a lot of time taking photos of cows in fact.

Initially our group headed out in two vehicles, with the intention of leaving one in Silver Ridge. Our first attempts at finding woodpeckers ended with no joy, although we were able to point out some of the other calling birds in the area to the Chen family.

One of the first calling birds in the early morning sunshine was a Sandhill Crane. Unfortunately we never saw them, but Randy and Odette did get a very good view! Photo copyright Randy Mooi

We picked up our first Red-headed Woodpeckers on about our third stop. Frank, on his first ever search for this species, managed to find one with an absolutely cracking spot on top of a tree. Brilliant! What’s more, at this and our second stop, we managed to pull out 4 woodpeckers, assuming we had 2 breeding pairs in each patch of habitat.

Overexposed and distant, but this striking pose is irresistible. Copyright Tim Poole

Jumping into a single vehicle at Silver Ridge, we headed off towards the east side of the highway, zigzagging across country in search of our target species. A Black-billed Cuckoo was among the other highlight birds of the morning. Northern Flickers undulated between trees, and Le Contes Sparrow called from the ditches. Fields of Ring-billed Gulls also gathered, a sign that summer is beginning to wane, and birds are starting to gather for a trip to the sun.

In total, we found a not unreasonable 15 Red-headed Woodpeckers, and I can assure you, with very high winds making listening incredibly difficult, we left a few woodpeckers out there, undiscovered by us. We did find a woodpecker entering its nesting cavity, and we also noted one in with a paddock of bison.

A Red-headed Woodpecker appeared as if from nowhere next to some yard sites on top of this hydro pole. Copyright Tim Poole

What of the other groups?

Group A managed to find a very impressive 13 woodpeckers in the north, although a few were north of the new IBA boundary (note to oneself, the boundary might need further revision). They managed to pick out a California Gull (which is why one should always bird with Christian), a single Eastern Wood-Pewee, and even a Nashville Warbler and a Black and White Warbler. The oak woodland west of Kinosota, an old area for Red-headed Woodpecker offered no luck on this occasion. Bobolinks were also among the species found.

This pair of Bobolink either had a major argument, or they really are convinced that no one can see them. Photo copyright Randy Mooi

Group C, driven by Harry were able to find an estimated 10 pairs, although we had to knock off a couple of the birds as they managed to stray into Randy and Odettes area! Other birding highlights included a recently fledged group of Sharp-tailed Grouse.

IBAs are not good for birds, hence this stunning Great Spangled Fritillary (thanks Deanna Dodgson for the i.d.). Photo copyright Randy Mooi

Group D, Randy and Odette Mooi began their scouting on Saturday, looking for woodpeckers in an area south of the current IBA boundary. The area around Kelwood did not turn up any woodpeckers. However, they had far more success driving along 79W, counting 9 relatively concentrated adults, pertaining to at least 5 territories.

Photos above show Red-headed Woodpeckers in the early evening light on snags. Both Copyright Randy Mooi.

The following morning, Randy and Odette searched the southwestern corner of the IBA, coming up with 5 woodpeckers on 5 territories, although there was a wee bit of overlap with the birds from the night before (this is shy we have GPS’s to record coordinates). Another highlight of their morning was a count of 10 Bobolinks, a grassland Species at Risk. Oh, and the two Upland Sandpipers spotted on Saturday evening was another decent species for this area. Being Curator of Zoology at the Manitoba Museum, Randy could not resist checking out a few things en route to look at, including the below Plains Garter Snake, which was both pregnant and rather full of food!

So there we have it, a very tidy total of Red-headed Woodpeckers for a very blustery morning, with volunteers who on the whole had never seen the area before. So what were our totals? First, here is our map of Red-headed Woodpeckers found over 2 days (the 9 from Randy and Odette from the previous day are added as they were still on breeding territories). There is certainly one road I would now drive down to look for this species!

The total figures for Red-headed Woodpecker, excluding those birds found outside the IBA, and double-counts was:

With at least 8 territories outside the IBA boundary, in large concentrations, I think another small revision might be required!

There is something almost frightening about a Red-headed Woodpecker surging headlong towards you! Is it the balck and white warning signs on the body and wings? Or the large red alert sign on the head? Photo copyright Randy Mooi

Here is our total IBA results for Sunday (Red-headed Woodpecker excluded). In total, 84 species were noted and over 3000 birds, most of which were Ring-billed Gulls in one field!

On completion of the blitz, each group made their way down to Hollywood Beach, part of the Sandy Bay Marshes IBA for a picnic. In addition to a slightly confused lone Tundra Swan, we had a really good list of migrant shorebirds on the shoreline. One Pectoral Sandpiper even threw one of our number into confusion (there were some similarities with Great Knot) – but Randy set that person straight. The number of northern shorebirds was very interesting in July, and indicative of news from the north that many High Arctic shorebirds have had a poor breeding season. In addition to the aforementioned Pecs, we had Stilts, Semipalmated Sandpipers and Plover, Baird’s, Least and Red-necked Phalaropes.

Marbled Godwits on the shore. Now, is that a Great Knot in the background? Photo Copyright Tim Poole

So there we have it, another blitz completed, and a rather fun one at that. We managed to cover two IBAs and find a trigger for the primary target species.

Thank you to everyone who came along at the weekend: Jo, Betsy, Sabina, Christian, Frank, Lily, Mike, Katharine, Harry, Dick, Natalie, Lynnea, Randy and Odette. Thanks to Randy also for the great photos.

There is more to come for the remainder of the summer for this program. Watch this space!