Joanne Smith, our caretaker for MB091 Riverton Sandy Bar gives us an overview of comings and goings during another successful 2017 in the IBA. All photos unless stated otherwise were taken by and copyright to Joanne Smith.

The year 2017 began as most years do at Important Bird And Biodiversity Area MB091 Riverton Sandy Bar. From January to March, ice fishing shacks dotted the ice on Lake Winnipeg, just south of the IBA’s Riverton Sandy Bar and Hecla Bar. This area is well known to both local and visiting recreational fishermen. 2017 also proved to be special because of local and visiting volunteers who came out to help pull invasive sweet clover with the goal of improving the habitat for possible future Piping Plover. With recent breeding success in other parts of the province, the possibility of having this nationally Endangered species return to Sandy Bar is quite real. The last record of nesting Piping Plover at Sandy Bar was in 2004.

From the arrival of Herring gulls in late March and first signs of nesting Canada Geese in early April, to the last fall migrants in late October, Sandy Bar can definitively be a hot spot for many species of birds ranging from the more common Mallard to the endangered Red Knot rufa subspecies. Fishermen, birders, volunteers and the birds all flock to Sandy Bar!

By the third week of April Herring Gulls had already begun to settle in and prepare nests. Approximately 65 gulls and 18 nests (without eggs) could be seen at the far end of Sandy Bar. American White Pelicans and Double Crested Cormorants had also made their arrival at this point.

Along with the arrival of new species, massive chunks of ice littered the shoreline as a wind/ rain/snow storm had battered the area in mid-April. Willows were bent over along the shoreline and the old wooden building which is used by nesting Barn Swallows (COSEWIC Threatened) received damage to many of its boards. The destruction left by the storm was a sharp contrast to the tranquility of seeing three Common Loons diving on the calm Lake Winnipeg waters just north of Sandy Bar. Hawk species Northern Harrier and Bald Eagle as well as the migrating song bird American Tree Sparrow were also regulars at this point. The huge Bald Eagle nest just west of the IBA boundary had already been occupied for several weeks at this point.

By early May other waterfowl species such as American Wigeon, Northern Pintail, Lesser Scaup and Gadwall were visiting the waters off Sandy Bar. Migrants Yellow-rumped and Palm Warblers could be seen along the shoreline and the Song Sparrows had already begun to check out the vegetation on the edge of the marsh that would make ideal spots to nest. One lone Snow Bunting lingered further out on the sand bar and one Barn Swallow had arrived to check out the building that would serve as home to its young in the coming weeks. At this point, a few shorebirds and marsh birds had also made an appearance. Two Marbled Godwits and one Sora (local breeder) were seen by mid-May. Towards the end of May sightings of migrating Sanderlings, Ruddy Turnstone, Whimbrel and Red Knot were also added to the shorebird visitor list. 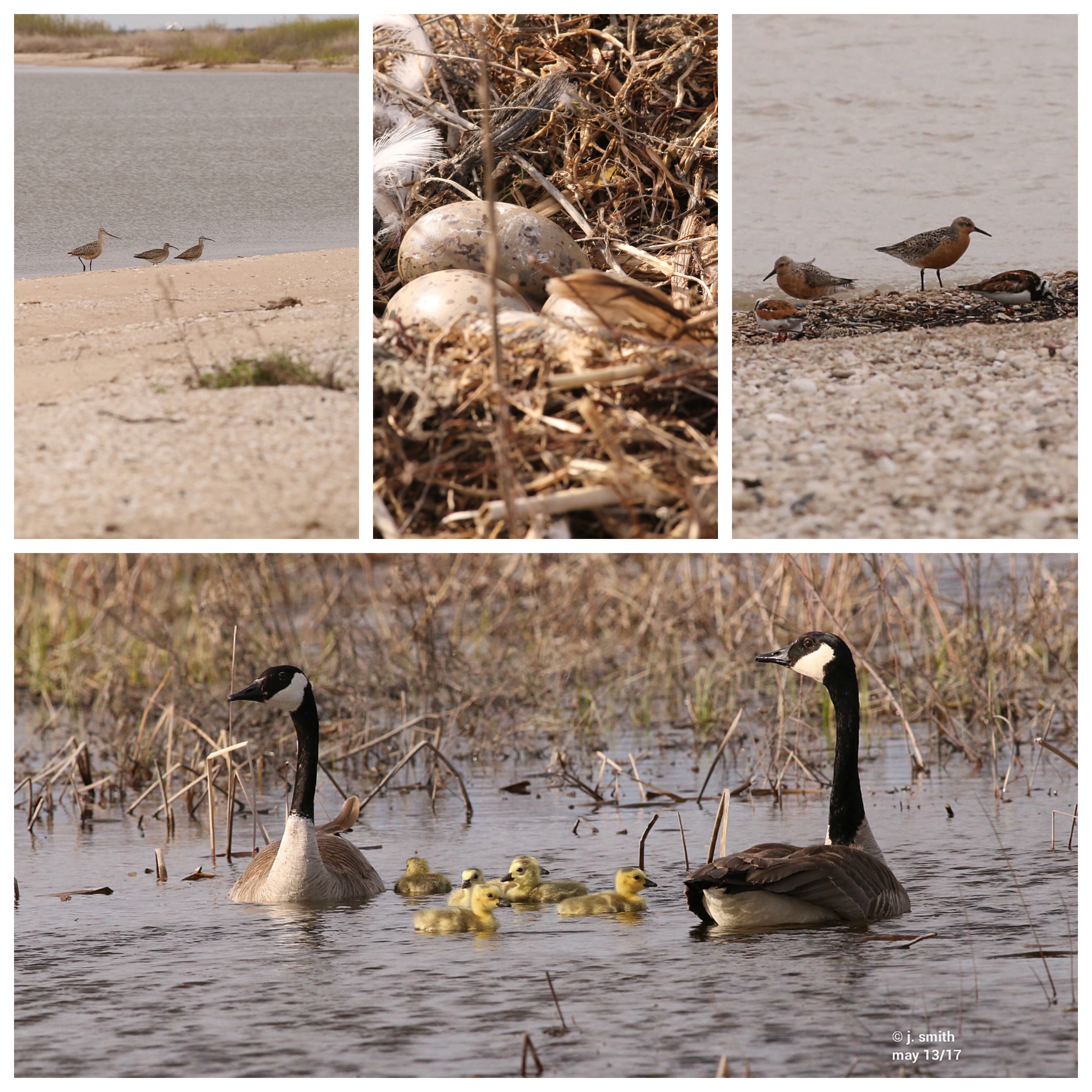 The month of June included a few more shorebird species including Dunlin (seen by Jock McCracken), Semipalmated Sandpipers, Semipalmated Plover, Black-bellied Plover, White- rumped Sandpiper and local breeding species Killdeer and Spotted Sandpiper. By June 8th one Killdeer pair had already chosen an area of the shoreline to nest on. Unfortunately they had chosen an area close to human foot and ATV traffic and it didn’t appear in later weeks as if they had been successful in this particular spot. But then again, much goes on that our human eyes never see. June was definitely a successful month for Canada Geese. Numerous families could be seen on the lake consisting of little fluffy goslings bouncing on the waves between protective parents. A view of Hecla Bar with binoculars showed American White-Pelican and Double-crested Cormorants taking it easy on the distant sand bar.

In July, 75 Herring Gull adults could be seen at the far end of Sandy Bar with at least 5 juveniles. Close to 300 Franklin’s Gulls were sunning themselves on the shoreline some distance from the Herring Gulls. Marsh Wrens were numerous along the road that winds through the marsh area of the IBA. Even though we humans think of July as a summer month, some shorebirds had already begun their fall migration south. By July 10th, two Greater Yellowlegs made a stop at Sandy Bar before continuing their journey south. 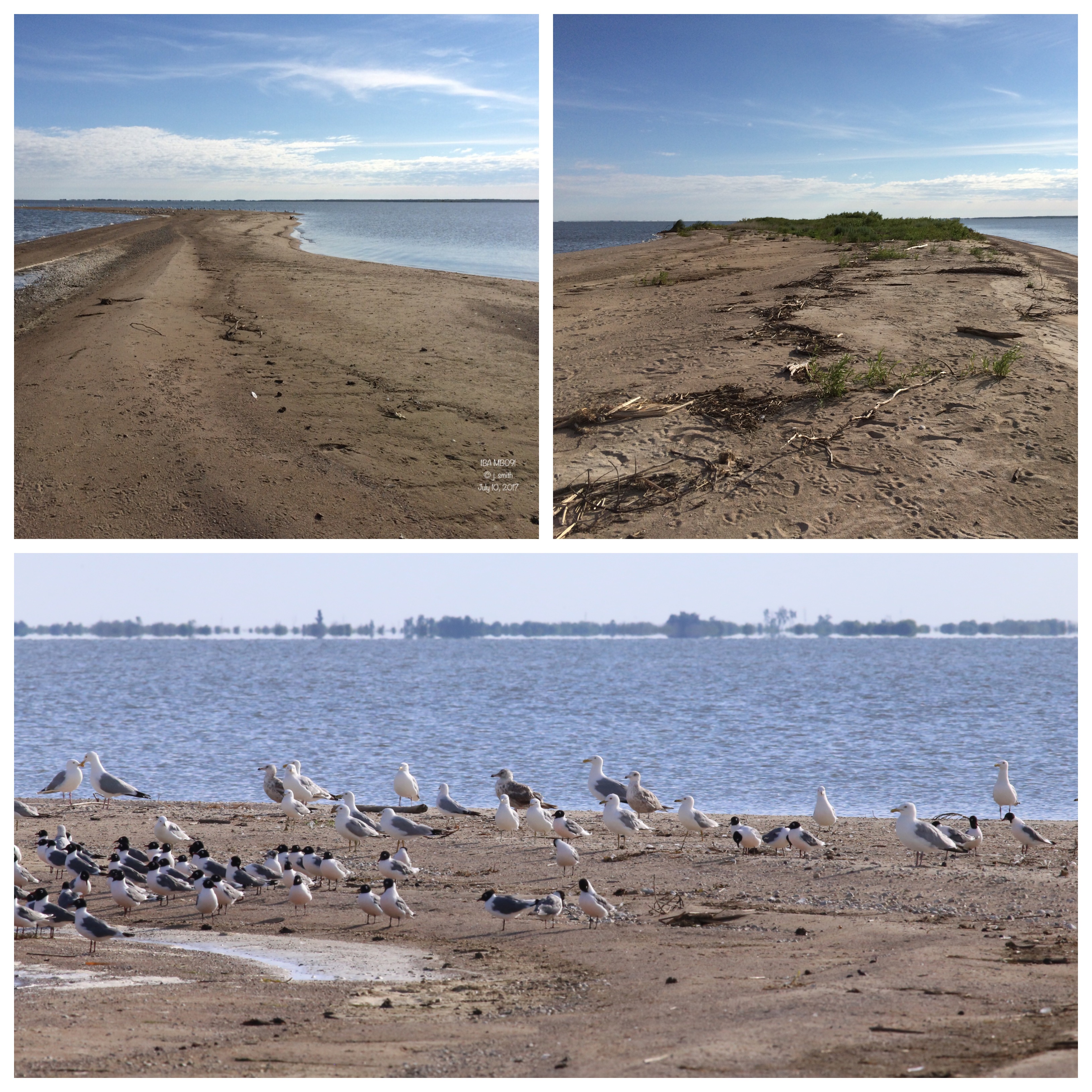 July images, clockwise from top left: looking out towards the tip of the bar; vegetation at the tip; Franklin’s Gulls, Ring-billed Gulls and Herring Gulls

By the first week of August more shorebirds were using Sandy Bar as a refueling station before continuing their fall migration. Many shorebird species nest in northern Canada and the Arctic and then fly back to South America for the winter months. Baird’s Sandpiper, Least Sandpiper, Semipalmated Sandpipers, Black-bellied Plovers, Ruddy Turnstone, one lone Sanderling and one Red Knot had made appearances in early August. 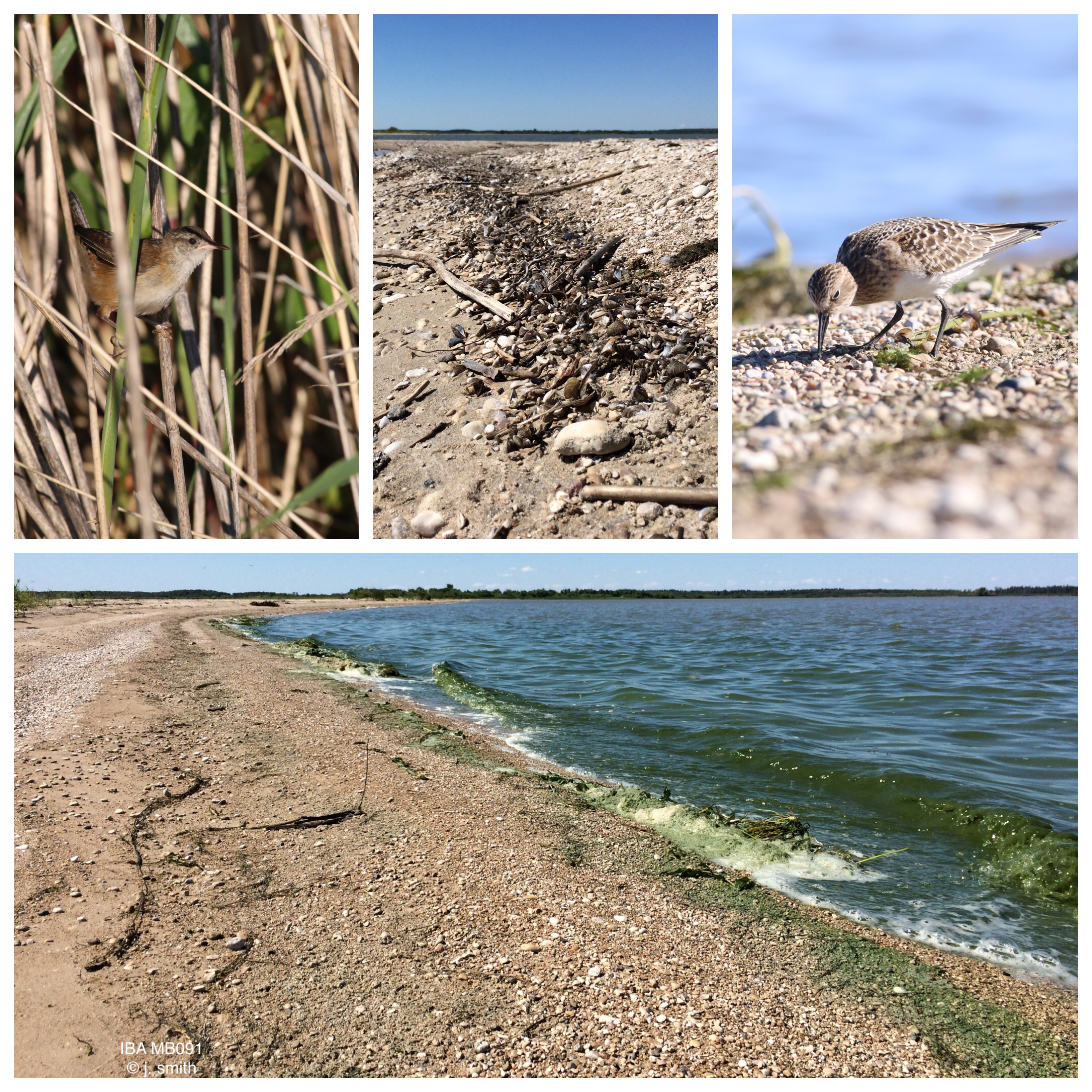 On August 17th, thirty-six volunteers from the Riverton, Interlake and Winnipeg areas, came together to pull weeds at Sandy Bar. Riverton resident, Thor Johannson was instrumental in recruiting local volunteers and both the East Interlake Conservation District and Manitoba Sustainable Development were on board to pull weeds. After a brief introduction and coffee and donuts, volunteers headed out onto the sand bar to begin the weed pull. The day started with a pleasant 16 degrees but soon rose to 26. Despite the heat, volunteers sweated their way to filling sixty-six bags of weeds! Not too shabby! Along with the humans, there were three additional shorebird species using the sand bar as a stopover refueling station. Lesser Yellowlegs, Pectoral Sandpiper and the super long distance migrant American Golden Plover (can fly up to 20,000 miles per year, including a nonstop flight of over 3000 miles over the Atlantic Ocean) put in an appearance. An extra bonus was when Linda Curtis spotted and photographed two Trumpeter Swans just north of the Sandy Bar marsh area.

Late August provided sightings of five Buff-breasted Sandpipers and four Red Knots. Buff- breasted Sandpipers are sometimes seen during migration in plowed fields or the sod farms near Oak Hammock Marsh. Having them show up at IBA Riverton Sandy Bar was an extra special bonus. A week later, both species were seen by a group of nine individuals. For some, this was the first time seeing them in 2017 and for a few others, they were lifers (a birder’s term used when they see a species for the very first time).

By September 8th, real signs of the upcoming fall season were noticed at Sandy Bar as Horned Lark and Lapland Longspur dropped by to refuel. On September 14th two American Black Ducks were noticed by Bonnie Chartier. American Pipits also put in an appearance. Earlier that day, Ryan and Irene Porteous were fortunate enough to see twenty-five White-winged Scoters on the lake. Another sure sign of the changing seasons.

Late summer also brought its regular waves of algae rolling onto shore. While it can look rather interesting, it’s probably not a good sign for Lake Winnipeg. Zebra mussels are now so common on the shoreline at Sandy Bar that one almost forgets to mention them.

On September 29th, another weed pull was carried out by volunteers. Thirty-five volunteers spent the morning pulling fifty bags of invasive sweet clover including a good number of people from the Riverton Friendship Centre. Riverton High School Science teacher Don Bodnarus brought his grade 9/10 class out to experience the event as part of their science and outdoor education program. And dare we use the word “snow” in the month of September, but one lone Snow Bunting was seen amongst the sixty-five Lapland Longspurs. A nice sighting of two more American Golden Plover and numerous Snow Geese also added to this successful event.

Earlier in September, John Weier spotted a Peregrine Falcon flying past the tip of Sandy Bar and by mid-October, the northern shore of the IBA was occupied by hundreds of migrating Canada and Cackling Geese. Later that month, Common Redpolls were also added to the 2017 fall bird list at Sandy Bar. Another sign that fall had definitely arrived.

The final chapter in the 2017 weed pulling weedathons was completed as Sustainable Development made their way out to Sandy Bar in October to burn the 100+ bags of invasive sweet clover. 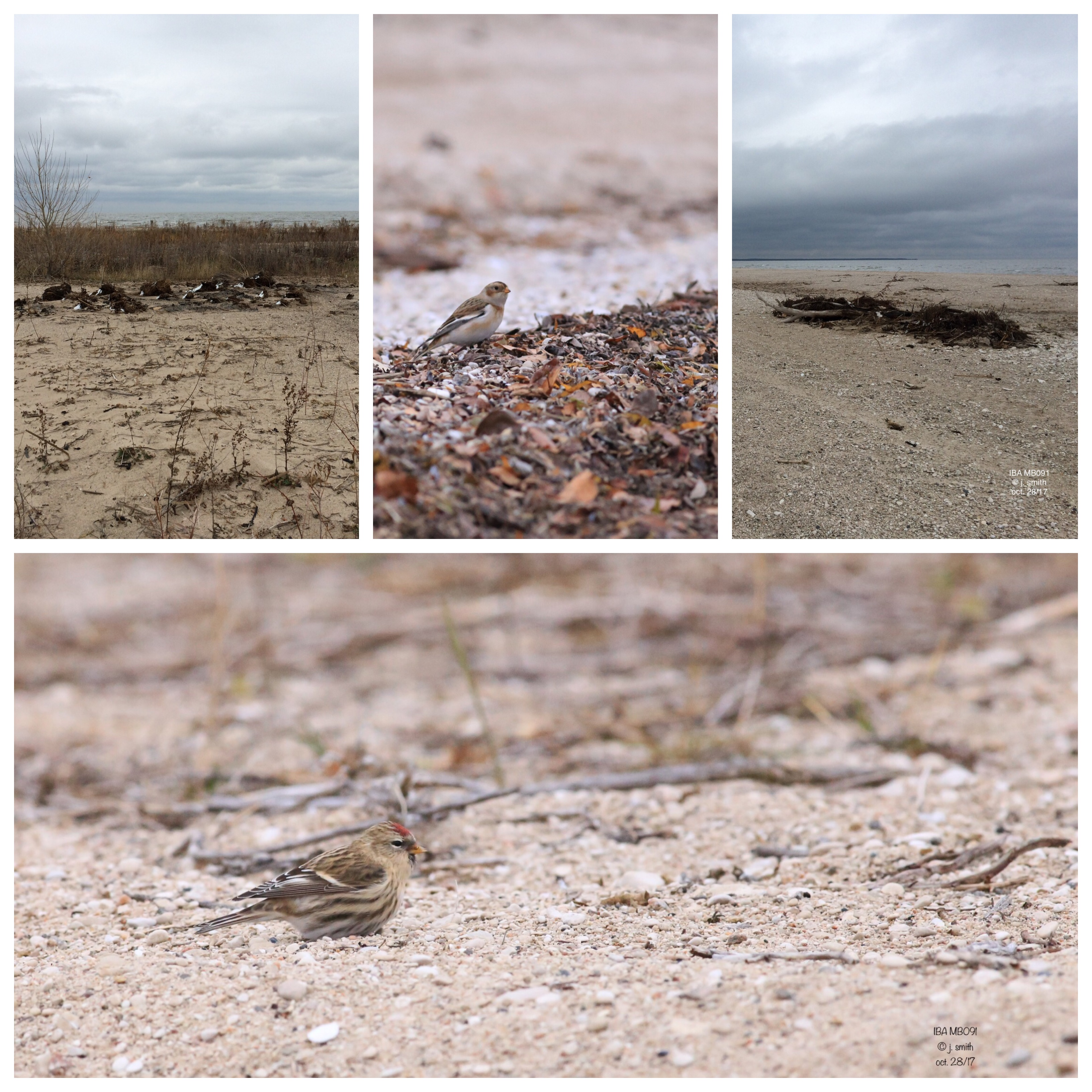 The lake levels were lower in 2017 than the previous 4 years since IBA Riverton Sandy Bar monitoring had begun. Despite this, one cannot help but think that it was the combined effort of many volunteers who cleared the area of weeds along with the lower lake levels that made Sandy Bar more appealing as a stopover for important migrating shorebirds such as the Buff- breasted Sandpiper and the endangered Red Knot.  With more weed pulling events and continued lower lake levels, maybe we’ll eventually see another pair of nationally Endangered Piping Plover stake out Riverton Sandy Bar as their place to successfully raise young.

Fall shorebird migration on the sandbar was the most successful in terms of species richness in a number of years – maybe a sign of early weeding success? Clockwise from top: Sanderlings and two Dunlin in flight, the sandy bar, more Sanderlins and Dunlin

Many thanks to all weed pullers, weed burners, bird monitors, Rona in Gimli for a donation of bags and gloves, those who made eBird entries and all who simply showed an interest in learning more about Important Bird And Biodiversity Area MB091 Riverton Sandy Bar.

Footnote: 2017 has been a wonderful year in the life of Riverton Sandy Bar, no doubt almost 100% due to one person. Joanne has been a fabulous caretaker and a real asset to the program. Thanks Joanne!