Kinosota-Leifur IBA is something rare in Manitoba – a readily accessible IBA which appears to be completely ignored by everyone. Much like Sandy Bay Marshes, this IBA is on the western side of Lake Manitoba and probably out of sight and out of mind for the majority of birders from Brandon (who head towards Whitewater and the southwest) and Winnipeg.

The first thing that is apparent with Kinosota-Leifur is the rather unusual map. The map probably needs some adapting, allowing for the fact that the target species does not tend to live and breed in the middle of Lake Manitoba! This target species in question is the beautiful and rare Red-headed Woodpecker. At least 100 have been counted in this area previously, a breeding population of national and global importance. 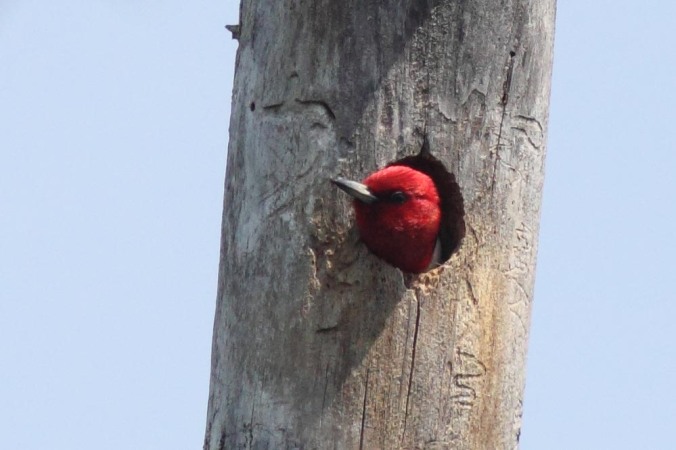 Being early May, it was very unlikely that I would see Red-headed Woodpecker. However, there was plenty of habitat around for this wonderful bird. The favoured habitat is heavily grazed, open woodlots with large amounts of standing deadwood.

One issue that is of concern is loss of habitat as the woodlots are converted to crop production.

Clearcut woodland in the IBA. This is obviously hopeless habitat for woodpeckers. Copyright Tim Poole

I am considering trying to get a group or two out to the IBA later this summer to blitz for Red-headed Woodpeckers. Driving around I wondered if a group from east of Lake Manitoba could access the IBA from the north via The Narrows and a group from south cover the southern part of the IBA. It would be great to at least start to monitor this undiscovered area.